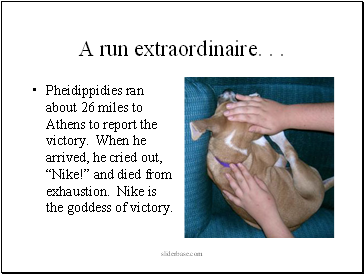 Pheidippidies ran about 26 miles to Athens to report the victory. When he arrived, he cried out, “Nike!” and died from exhaustion. Nike is the goddess of victory. 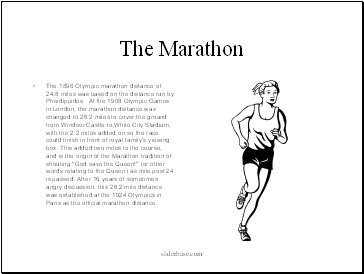 The 1896 Olympic marathon distance of 24.8 miles was based on the distance run by Pheidippides. At the 1908 Olympic Games in London, the marathon distance was changed to 26.2 miles to cover the ground from Windsor Castle to White City Stadium, with the 2.2 miles added on so the race could finish in front of royal family's viewing box. This added two miles to the course, and is the origin of the Marathon tradition of shouting "God save the Queen!" (or other words relating to the Queen) as mile post 24 is passed. After 16 years of sometimes angry discussion, this 26.2 mile distance was established at the 1924 Olympics in Paris as the official marathon distance. 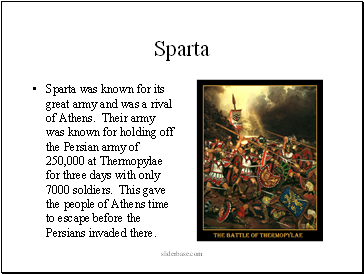 Sparta was known for its great army and was a rival of Athens. Their army was known for holding off the Persian army of 250,000 at Thermopylae for three days with only 7000 soldiers. This gave the people of Athens time to escape before the Persians invaded there. 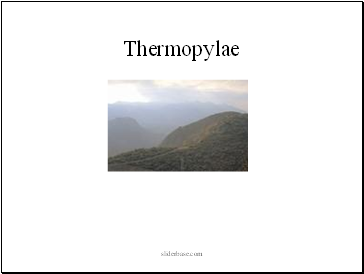 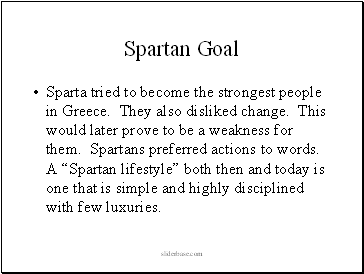 Sparta tried to become the strongest people in Greece. They also disliked change. This would later prove to be a weakness for them. Spartans preferred actions to words. A “Spartan lifestyle” both then and today is one that is simple and highly disciplined with few luxuries. 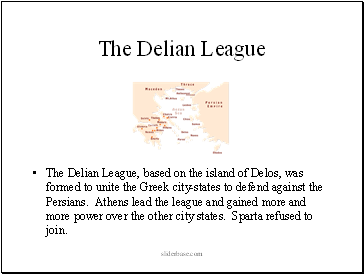 The Delian League, based on the island of Delos, was formed to unite the Greek city-states to defend against the Persians. Athens lead the league and gained more and more power over the other city states. Sparta refused to join. 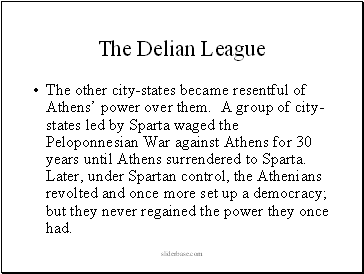 The other city-states became resentful of Athens’ power over them. A group of city-states led by Sparta waged the Peloponnesian War against Athens for 30 years until Athens surrendered to Sparta. Later, under Spartan control, the Athenians revolted and once more set up a democracy; but they never regained the power they once had. 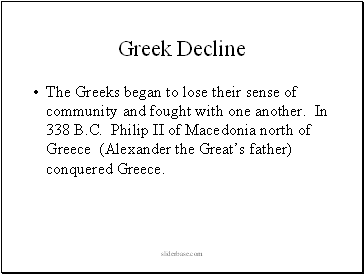 The Greeks began to lose their sense of community and fought with one another. In 338 B.C. Philip II of Macedonia north of Greece (Alexander the Great’s father) conquered Greece.