The same writer says that this act haunted the Conqueror to his dying day. On his death-bed, he repented:

‘I . caused the death of thousands by starvation and war,

especially in Yorkshire. In a mad fury,

I descended on the English of the north like a raging lion,

and ordered that all their homes and crops,

and all their equipment and furnishings,

should be burnt at once;

and their great flocks and herds of sheep and cattle

So I chastised a great multitude of men and women

with the lash of starvation and, alas,

was the cruel murderer of many thousands’ 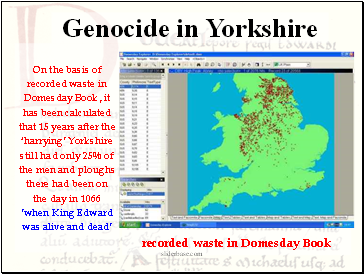 On the basis of recorded waste in Domesday Book, it has been calculated that 15 years after the ‘harrying’ Yorkshire still had only 25% of the men and ploughs there had been on the day in 1066 ’when King Edward was alive and dead’ 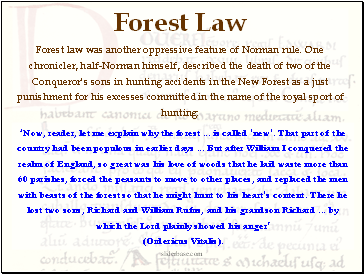 Forest law was another oppressive feature of Norman rule. One chronicler, half-Norman himself, described the death of two of the Conqueror's sons in hunting accidents in the New Forest as a just punishment for his excesses committed in the name of the royal sport of hunting:

‘Now, reader, let me explain why the forest . is called 'new'. That part of the country had been populous in earlier days . But after William I conquered the realm of England, so great was his love of woods that he laid waste more than 60 parishes, forced the peasants to move to other places, and replaced the men with beasts of the forest so that he might hunt to his heart's content. There he lost two sons, Richard and William Rufus, and his grandson Richard . by which the Lord plainly showed his anger’ (Ordericus Vitalis). 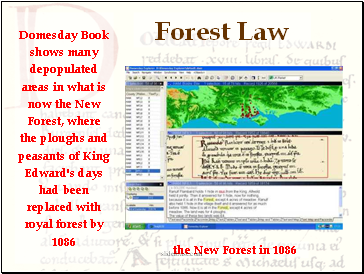 Domesday Book shows many depopulated areas in what is now the New Forest, where the ploughs and peasants of King Edward's days had been replaced with royal forest by 1086 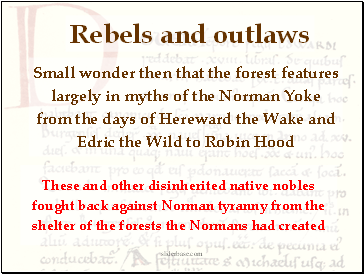 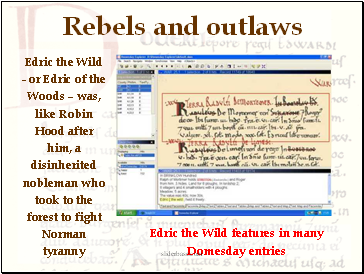 Edric the Wild features in many Domesday entries

Edric the Wild - or Edric of the Woods – was, like Robin Hood after him, a disinherited nobleman who took to the forest to fight Norman tyranny