sense) explanation: It is

only natural that a man and

woman should live together

for life because they fall in

love and want to raise children

Sociological explanation: Monogamy (one woman and one man) is only one form of mating. Mating patterns depend on a variety of economic and social factors. Marriage is a human institution. 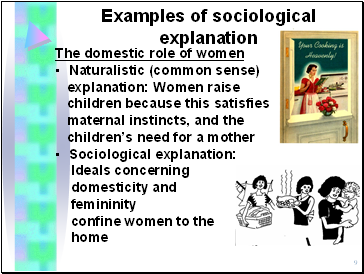 The domestic role of women

children because this satisfies

maternal instincts, and the

children’s need for a mother

confine women to the 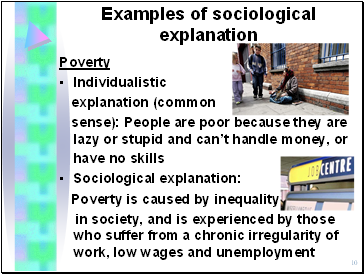 sense): People are poor because they are lazy or stupid and can’t handle money, or have no skills

Poverty is caused by inequality

in society, and is experienced by those who suffer from a chronic irregularity of work, low wages and unemployment 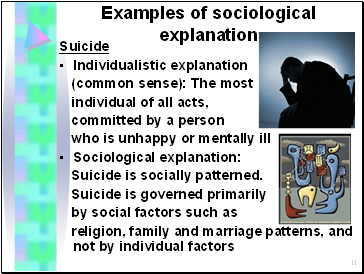 (common sense): The most

individual of all acts,

committed by a person

who is unhappy or mentally ill

by social factors such as

religion, family and marriage patterns, and not by individual factors 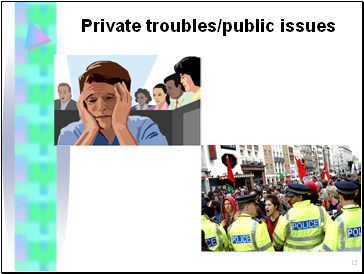 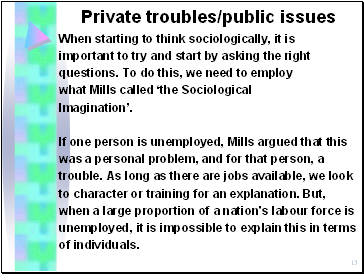 When starting to think sociologically, it is

important to try and start by asking the right

questions. To do this, we need to employ

what Mills called ‘the Sociological

If one person is unemployed, Mills argued that this

was a personal problem, and for that person, a

trouble. As long as there are jobs available, we look

to character or training for an explanation. But,

when a large proportion of a nation's labour force is

unemployed, it is impossible to explain this in terms 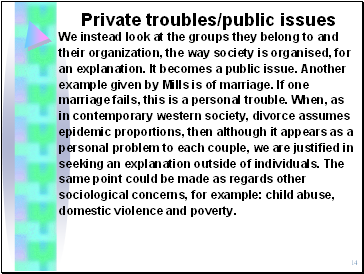 We instead look at the groups they belong to and

their organization, the way society is organised, for

an explanation. It becomes a public issue. Another