You won’t confuse abstract nouns with adjectives, as long as you apply a few tests.

Happy is an adjective. It behaves like one: very happy; so happy; happier; as happy as

Happiness behaves like a noun: The happiness I feel; her happiness; great happiness. 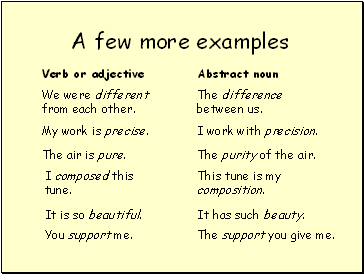 We were different from each other.

The difference between us.

My work is precise.

I work with precision.

The air is pure.

The purity of the air.

I composed this tune.

This tune is my composition.

It is so beautiful.

It has such beauty.

The support you give me. 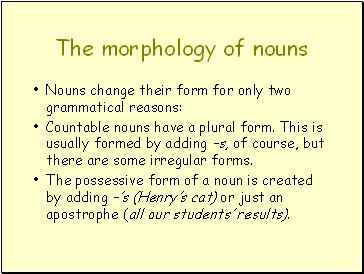 The morphology of nouns

Nouns change their form for only two grammatical reasons:

Countable nouns have a plural form. This is usually formed by adding –s, of course, but there are some irregular forms.

The possessive form of a noun is created by adding –’s (Henry’s cat) or just an apostrophe (all our students’ results). 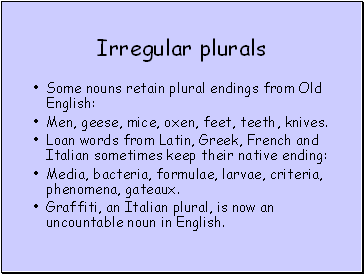 Graffiti, an Italian plural, is now an uncountable noun in English. 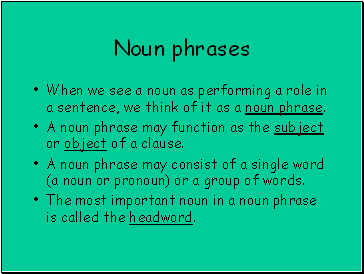 When we see a noun as performing a role in a sentence, we think of it as a noun phrase.

A noun phrase may function as the subject or object of a clause.

A noun phrase may consist of a single word (a noun or pronoun) or a group of words.

The most important noun in a noun phrase is called the headword. 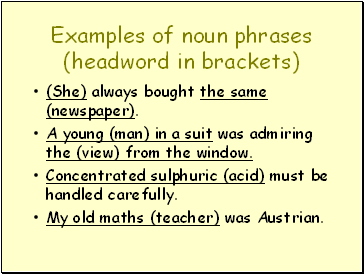 (She) always bought the same (newspaper).

A young (man) in a suit was admiring the (view) from the window.

My old maths (teacher) was Austrian. 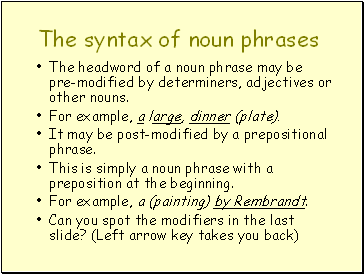 The syntax of noun phrases

The headword of a noun phrase may be pre-modified by determiners, adjectives or other nouns.

For example, a large, dinner (plate).

It may be post-modified by a prepositional phrase.

This is simply a noun phrase with a preposition at the beginning.

For example, a (painting) by Rembrandt.

Can you spot the modifiers in the last slide? (Left arrow key takes you back)