Approximately 95 percent of all AIDS orphans in the world live in sub-Saharan Africa.

Sub-Saharan Africa is the region of the world that is most affected by HIV & AIDS. An estimated 25.8 million people were living with HIV at the end of 2005 and approximately 3.1 million new infections occurred during that year. In just the past year the epidemic has claimed the lives of an estimated 2.4 million people in this region. More than twelve million children have been orphaned by AIDS. 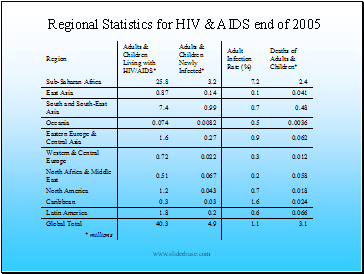