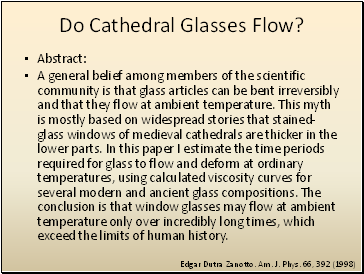 A general belief among members of the scientific community is that glass articles can be bent irreversibly and that they flow at ambient temperature. This myth is mostly based on widespread stories that stained-glass windows of medieval cathedrals are thicker in the lower parts. In this paper I estimate the time periods required for glass to flow and deform at ordinary temperatures, using calculated viscosity curves for several modern and ancient glass compositions. The conclusion is that window glasses may flow at ambient temperature only over incredibly long times, which exceed the limits of human history. 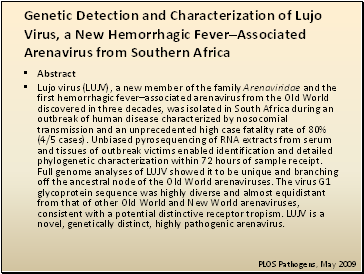 Lujo virus (LUJV), a new member of the family Arenaviridae and the first hemorrhagic fever–associated arenavirus from the Old World discovered in three decades, was isolated in South Africa during an outbreak of human disease characterized by nosocomial transmission and an unprecedented high case fatality rate of 80% (4/5 cases). Unbiased pyrosequencing of RNA extracts from serum and tissues of outbreak victims enabled identification and detailed phylogenetic characterization within 72 hours of sample receipt. Full genome analyses of LUJV showed it to be unique and branching off the ancestral node of the Old World arenaviruses. The virus G1 glycoprotein sequence was highly diverse and almost equidistant from that of other Old World and New World arenaviruses, consistent with a potential distinctive receptor tropism. LUJV is a novel, genetically distinct, highly pathogenic arenavirus. 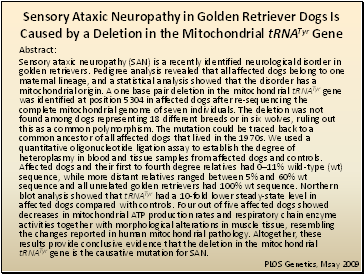 Sensory ataxic neuropathy (SAN) is a recently identified neurological disorder in golden retrievers. Pedigree analysis revealed that all affected dogs belong to one maternal lineage, and a statistical analysis showed that the disorder has a mitochondrial origin. A one base pair deletion in the mitochondrial tRNATyr gene was identified at position 5304 in affected dogs after re-sequencing the complete mitochondrial genome of seven individuals. The deletion was not found among dogs representing 18 different breeds or in six wolves, ruling out this as a common polymorphism. The mutation could be traced back to a common ancestor of all affected dogs that lived in the 1970s. We used a quantitative oligonucleotide ligation assay to establish the degree of heteroplasmy in blood and tissue samples from affected dogs and controls. Affected dogs and their first to fourth degree relatives had 0–11% wild-type (wt) sequence, while more distant relatives ranged between 5% and 60% wt sequence and all unrelated golden retrievers had 100% wt sequence. Northern blot analysis showed that tRNATyr had a 10-fold lower steady-state level in affected dogs compared with controls. Four out of five affected dogs showed decreases in mitochondrial ATP production rates and respiratory chain enzyme activities together with morphological alterations in muscle tissue, resembling the changes reported in human mitochondrial pathology. Altogether, these results provide conclusive evidence that the deletion in the mitochondrial tRNATyr gene is the causative mutation for SAN.