“To hold a course, the navigator aligns the rising or setting sun to marks on the railings of the canoe. There are 8 marks on each side of the canoe, each paired with a single point at the stern of the canoe, giving bearings in two directions, 32 bearings in all to match the 32 directional houses of the Hawaiian star compass.” (PVC) 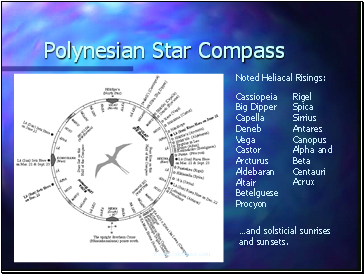 …and solsticial sunrises and sunsets. 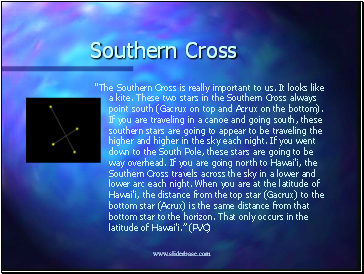 "The Southern Cross is really important to us. It looks like a kite. These two stars in the Southern Cross always point south (Gacrux on top and Acrux on the bottom). If you are traveling in a canoe and going south, these southern stars are going to appear to be traveling the higher and higher in the sky each night. If you went down to the South Pole, these stars are going to be way overhead. If you are going north to Hawai'i, the Southern Cross travels across the sky in a lower and lower arc each night. When you are at the latitude of Hawai'i, the distance from the top star (Gacrux) to the bottom star (Acrux) is the same distance from that bottom star to the horizon. That only occurs in the latitude of Hawai'i.” (PVC) 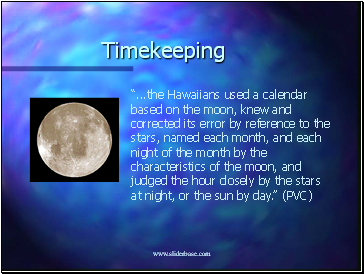 “ .the Hawaiians used a calendar based on the moon, knew and corrected its error by reference to the stars, named each month, and each night of the month by the characteristics of the moon, and judged the hour closely by the stars at night, or the sun by day.” (PVC) 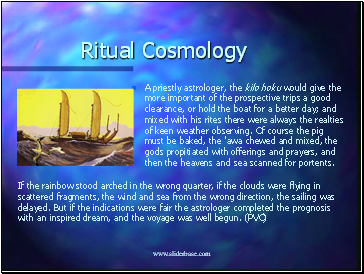 A priestly astrologer, the kilo hoku would give the more important of the prospective trips a good clearance, or hold the boat for a better day; and mixed with his rites there were always the realties of keen weather observing. Of course the pig must be baked, the 'awa chewed and mixed, the gods propitiated with offerings and prayers, and then the heavens and sea scanned for portents.

If the rainbow stood arched in the wrong quarter, if the clouds were flying in scattered fragments, the wind and sea from the wrong direction, the sailing was delayed. But if the indications were fair the astrologer completed the prognosis with an inspired dream, and the voyage was well begun. (PVC) 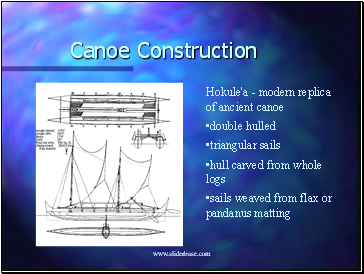