Inner and Outer Planets of the Solar System
Page
2 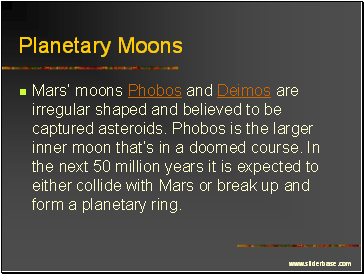 Mars’ moons Phobos and Deimos are irregular shaped and believed to be captured asteroids. Phobos is the larger inner moon that’s in a doomed course. In the next 50 million years it is expected to either collide with Mars or break up and form a planetary ring. 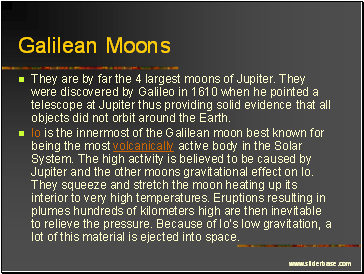 They are by far the 4 largest moons of Jupiter. They were discovered by Galileo in 1610 when he pointed a telescope at Jupiter thus providing solid evidence that all objects did not orbit around the Earth.

Io is the innermost of the Galilean moon best known for being the most volcanically active body in the Solar System. The high activity is believed to be caused by Jupiter and the other moons gravitational effect on Io. They squeeze and stretch the moon heating up its interior to very high temperatures. Eruptions resulting in plumes hundreds of kilometers high are then inevitable to relieve the pressure. Because of Io’s low gravitation, a lot of this material is ejected into space. 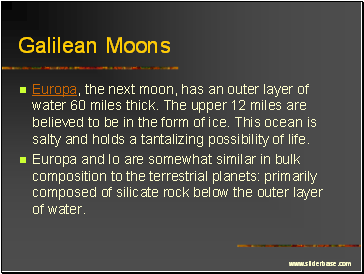 Europa, the next moon, has an outer layer of water 60 miles thick. The upper 12 miles are believed to be in the form of ice. This ocean is salty and holds a tantalizing possibility of life.

Europa and Io are somewhat similar in bulk composition to the terrestrial planets: primarily composed of silicate rock below the outer layer of water. 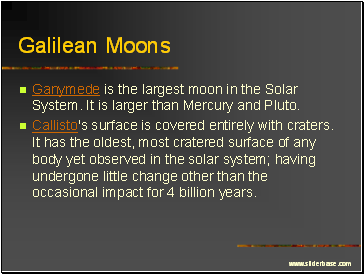 Ganymede is the largest moon in the Solar System. It is larger than Mercury and Pluto.

Callisto's surface is covered entirely with craters. It has the oldest, most cratered surface of any body yet observed in the solar system; having undergone little change other than the occasional impact for 4 billion years. 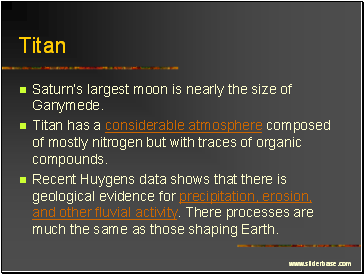 Saturn’s largest moon is nearly the size of Ganymede.

Titan has a considerable atmosphere composed of mostly nitrogen but with traces of organic compounds.

Recent Huygens data shows that there is geological evidence for precipitation, erosion, and other fluvial activity. There processes are much the same as those shaping Earth. 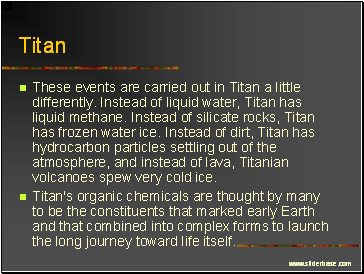 These events are carried out in Titan a little differently. Instead of liquid water, Titan has liquid methane. Instead of silicate rocks, Titan has frozen water ice. Instead of dirt, Titan has hydrocarbon particles settling out of the atmosphere, and instead of lava, Titanian volcanoes spew very cold ice.