Inner and Outer Planets of the Solar System
Page
3

Titan's organic chemicals are thought by many to be the constituents that marked early Earth and that combined into complex forms to launch the long journey toward life itself. 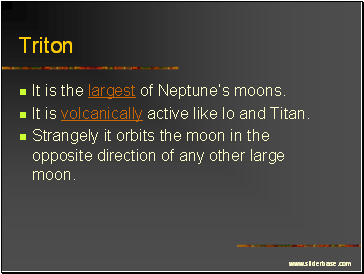 It is the largest of Neptune’s moons.

Strangely it orbits the moon in the opposite direction of any other large moon. 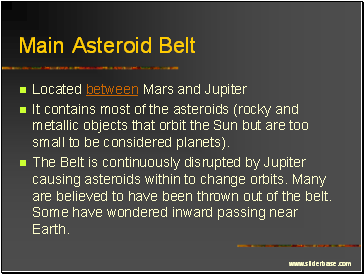 Located between Mars and Jupiter

It contains most of the asteroids (rocky and metallic objects that orbit the Sun but are too small to be considered planets).

The Belt is continuously disrupted by Jupiter causing asteroids within to change orbits. Many are believed to have been thrown out of the belt. Some have wondered inward passing near Earth. 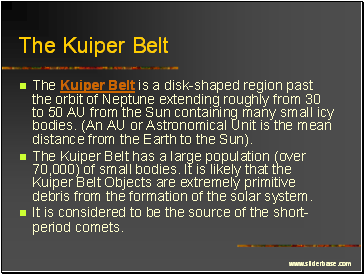 The Kuiper Belt is a disk-shaped region past the orbit of Neptune extending roughly from 30 to 50 AU from the Sun containing many small icy bodies. (An AU or Astronomical Unit is the mean distance from the Earth to the Sun).

The Kuiper Belt has a large population (over 70,000) of small bodies. It is likely that the Kuiper Belt Objects are extremely primitive debris from the formation of the solar system.

It is considered to be the source of the short-period comets. 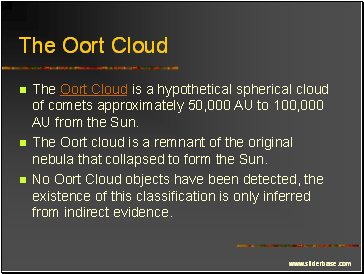 The Oort Cloud is a hypothetical spherical cloud of comets approximately 50,000 AU to 100,000 AU from the Sun.

The Oort cloud is a remnant of the original nebula that collapsed to form the Sun.

No Oort Cloud objects have been detected, the existence of this classification is only inferred from indirect evidence.