Bracket values from Francis and Anderson (2009) 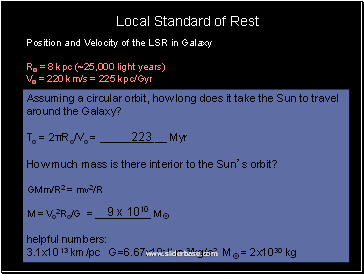 Position and Velocity of the LSR in Galaxy

Assuming a circular orbit, how long does it take the Sun to travel around the Galaxy?

How much mass is there interior to the Sun’s orbit? 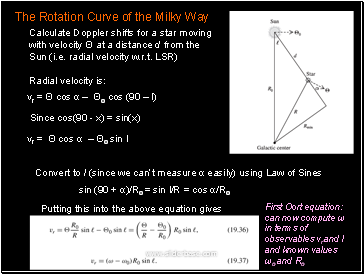 Calculate Doppler shifts for a star moving with velocity Θ at a distance d from the Sun (i.e. radial velocity w.r.t. LSR)

Putting this into the above equation gives

The Rotation Curve of the Milky Way

First Oort equation: can now compute ω in terms of observables vr and l and known values ωo and Ro 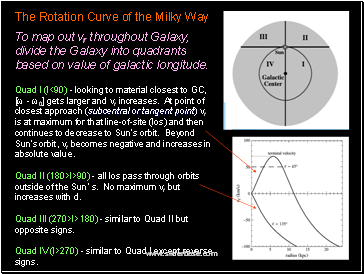 To map out vr throughout Galaxy, divide the Galaxy into quadrants based on value of galactic longitude.

Quad I (l<90) - looking to material closest to GC, [ω - ω0] gets larger and vr increases. At point of closest approach (subcentral or tangent point) vr is at maximum for that line-of-site (los) and then continues to decrease to Sun’s orbit. Beyond Sun’s orbit, vr becomes negative and increases in absolute value.

The Rotation Curve of the Milky Way 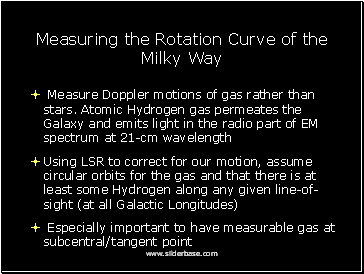 Measure Doppler motions of gas rather than stars. Atomic Hydrogen gas permeates the Galaxy and emits light in the radio part of EM spectrum at 21-cm wavelength

Using LSR to correct for our motion, assume circular orbits for the gas and that there is at least some Hydrogen along any given line-of-sight (at all Galactic Longitudes)

Especially important to have measurable gas at subcentral/tangent point 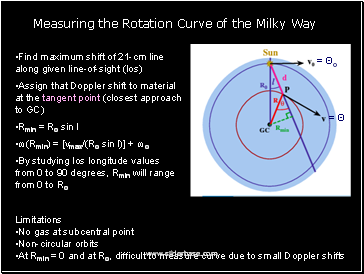