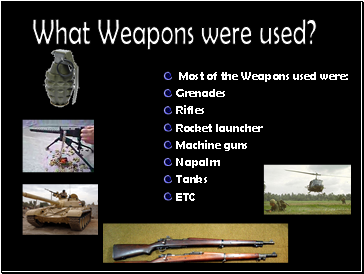 What Weapons were used?

Most of the Weapons used were: 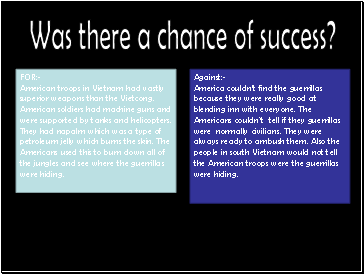 Was there a chance of success?

American troops in Vietnam had vastly superior weapons than the Vietcong. American soldiers had machine guns and were supported by tanks and helicopters. They had napalm which was a type of petroleum jelly which burns the skin. The Americans used this to burn down all of the jungles and see where the guerrillas were hiding. 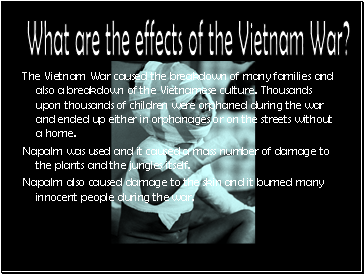 What are the effects of the Vietnam War?

The Vietnam War caused the breakdown of many families and also a breakdown of the Vietnamese culture. Thousands upon thousands of children were orphaned during the war and ended up either in orphanages or on the streets without a home.

Napalm was used and it caused a mass number of damage to the plants and the jungles itself.

Napalm also caused damage to the skin and it burned many innocent people during the war. 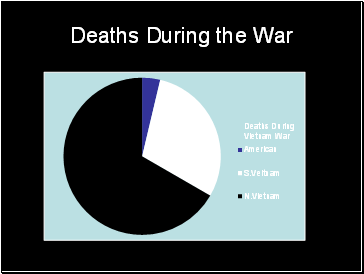 Deaths During the War 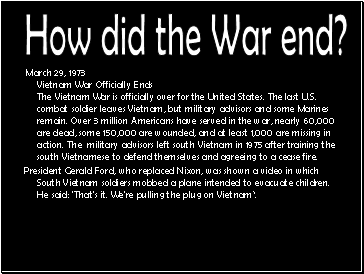 How did the War end?

March 29, 1973 Vietnam War Officially Ends The Vietnam War is officially over for the United States. The last U.S. combat soldier leaves Vietnam, but military advisors and some Marines remain. Over 3 million Americans have served in the war, nearly 60,000 are dead, some 150,000 are wounded, and at least 1,000 are missing in action. The military advisors left south Vietnam in 1975 after training the south Vietnamese to defend themselves and agreeing to a cease fire.

President Gerald Ford, who replaced Nixon, was shown a video in which South Vietnam soldiers mobbed a plane intended to evacuate children. He said: 'That's it. We're pulling the plug on Vietnam’. 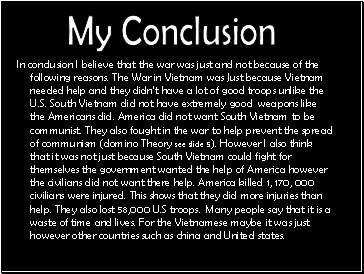 In conclusion I believe that the war was just and not because of the following reasons. The War in Vietnam was Just because Vietnam needed help and they didn't have a lot of good troops unlike the U.S. South Vietnam did not have extremely good weapons like the Americans did. America did not want South Vietnam to be communist. They also fought in the war to help prevent the spread of communism (domino Theory see slide 5). However I also think that it was not just because South Vietnam could fight for themselves the government wanted the help of America however the civilians did not want there help. America killed 1, 170, 000 civilians were injured. This shows that they did more injuries than help. They also lost 58,000 U.S troops. Many people say that it is a waste of time and lives. For the Vietnamese maybe it was just however other countries such as china and United states.