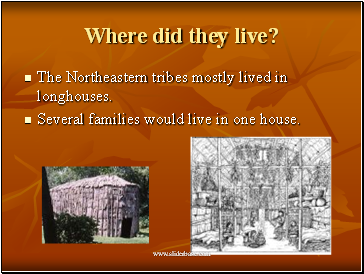 Several families would live in one house. 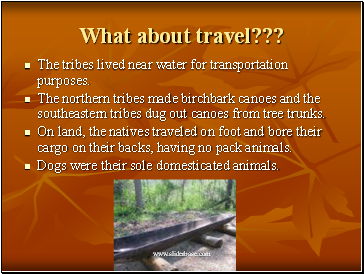 The tribes lived near water for transportation purposes.

The northern tribes made birchbark canoes and the southeastern tribes dug out canoes from tree trunks.

On land, the natives traveled on foot and bore their cargo on their backs, having no pack animals.

Dogs were their sole domesticated animals. 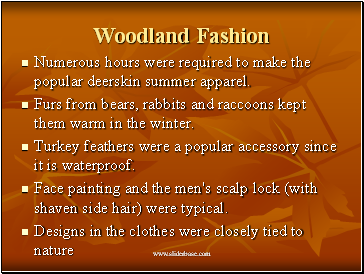 Furs from bears, rabbits and raccoons kept them warm in the winter.

Turkey feathers were a popular accessory since it is waterproof.

Face painting and the men's scalp lock (with shaven side hair) were typical.

Designs in the clothes were closely tied to nature 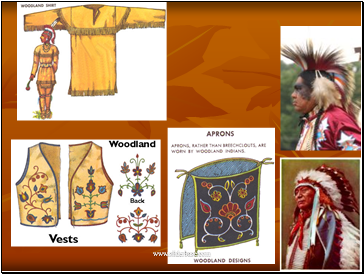 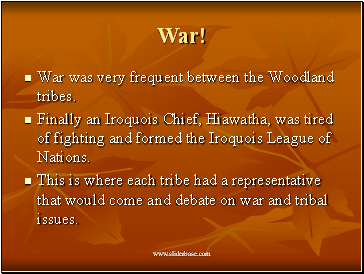 War was very frequent between the Woodland tribes.

Finally an Iroquois Chief, Hiawatha, was tired of fighting and formed the Iroquois League of Nations.

This is where each tribe had a representative that would come and debate on war and tribal issues. 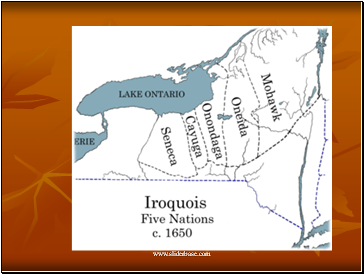 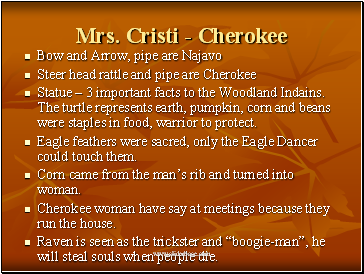 Bow and Arrow, pipe are Najavo

Statue – 3 important facts to the Woodland Indains. The turtle represents earth, pumpkin, corn and beans were staples in food, warrior to protect.

Eagle feathers were sacred, only the Eagle Dancer could touch them.

Corn came from the man’s rib and turned into woman.

Cherokee woman have say at meetings because they run the house.

Raven is seen as the trickster and “boogie-man”, he will steal souls when people die.