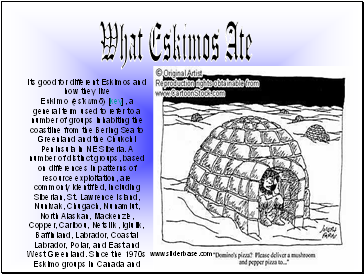 Its good for different Eskimos and how they live

Eskimo (es'kumō) [key], a general term used to refer to a number of groups inhabiting the coastline from the Bering Sea to Greenland and the Chukchi Peninsula in NE Siberia. A number of distinct groups, based on differences in patterns of resource exploitation, are commonly identified, including Siberian, St. Lawrence Island, Nunivak, Chugach, Nunamiut, North Alaskan, Mackenzie, Copper, Caribou, Netsilik, Iglulik, Baffinland, Labrador, Coastal Labrador, Polar, and East and West Greenland. Since the 1970s Eskimo groups in Canada and 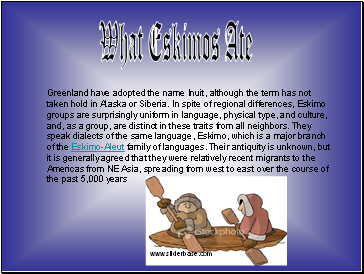 Greenland have adopted the name Inuit, although the term has not taken hold in Alaska or Siberia. In spite of regional differences, Eskimo groups are surprisingly uniform in language, physical type, and culture, and, as a group, are distinct in these traits from all neighbors. They speak dialects of the same language, Eskimo, which is a major branch of the Eskimo-Aleut family of languages. Their antiquity is unknown, but it is generally agreed that they were relatively recent migrants to the Americas from NE Asia, spreading from west to east over the course of the past 5,000 years 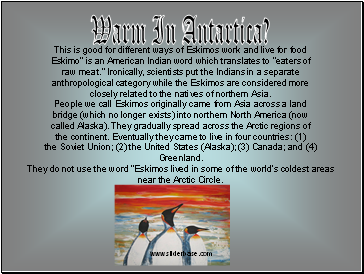 Eskimo" is an American Indian word which translates to "eaters of raw meat." Ironically, scientists put the Indians in a separate anthropological category while the Eskimos are considered more closely related to the natives of northern Asia.

People we call Eskimos originally came from Asia across a land bridge (which no longer exists) into northern North America (now called Alaska). They gradually spread across the Arctic regions of the continent. Eventually they came to live in four countries: (1) the Soviet Union; (2) the United States (Alaska); (3) Canada; and (4) Greenland.

near the Arctic Circle. 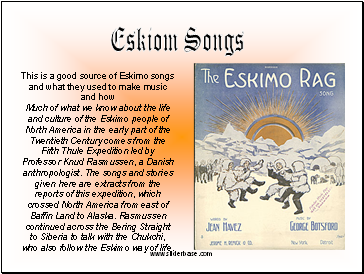 Much of what we know about the life and culture of the Eskimo people of North America in the early part of the Twentieth Century comes from the Fifth Thule Expedition led by Professor Knud Rasmussen, a Danish anthropologist. The songs and stories given here are extracts from the reports of this expedition, which crossed North America from east of Baffin Land to Alaska. Rasmussen continued across the Bering Straight to Siberia to talk with the Chukchi, who also follow the Eskimo way of life.