Eskimo is an exonym of Algonquian origin and is a deprecated name, but is retained to speak of the Yuit-Yup'ik-Inuit as a whole. Within Canada, Inuit is preferred. In Alaska, Yup'ik, Inupiaq, or Inuit is preferred, depending on who is being referred to.

A Life Of An Eskimo 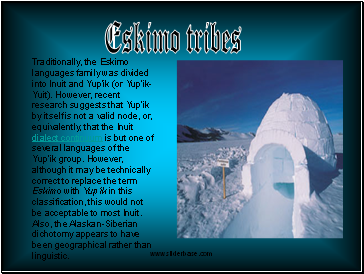 Traditionally, the Eskimo languages family was divided into Inuit and Yup'ik (or Yup'ik-Yuit). However, recent research suggests that Yup'ik by itself is not a valid node, or, equivalently, that the Inuit dialect continuum is but one of several languages of the Yup'ik group. However, although it may be technically correct to replace the term Eskimo with Yup'ik in this classification, this would not be acceptable to most Inuit. Also, the Alaskan-Siberian dichotomy appears to have been geographical rather than linguistic. 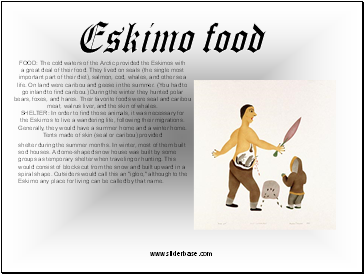 FOOD: The cold waters of the Arctic provided the Eskimos with a great deal of their food. They lived on seals (the single most important part of their diet), salmon, cod, whales, and other sea life. On land were caribou and geese in the summer. (You had to go inland to find caribou.) During the winter they hunted polar bears, foxes, and hares. Their favorite foods were seal and caribou meat, walrus liver, and the skin of whales.

SHELTER: In order to find those animals, it was necessary for the Eskimos to live a wandering life, following their migrations. Generally, they would have a summer home and a winter home. Tents made of skin (seal or caribou) provided

shelter during the summer months. In winter, most of them built sod houses. A dome-shaped snow house was built by some groups as temporary shelter when traveling or hunting. This would consist of blocks cut from the snow and built upward in a spiral shape. Outsiders would call this an "igloo," although to the Eskimo any place for living can be called by that name. 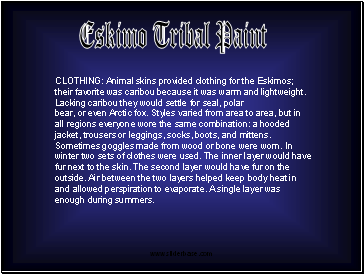 CLOTHING: Animal skins provided clothing for the Eskimos; their favorite was caribou because it was warm and lightweight. Lacking caribou they would settle for seal, polar bear, or even Arctic fox. Styles varied from area to area, but in all regions everyone wore the same combination: a hooded jacket, trousers or leggings, socks, boots, and mittens. Sometimes goggles made from wood or bone were worn. In winter two sets of clothes were used. The inner layer would have fur next to the skin. The second layer would have fur on the outside. Air between the two layers helped keep body heat in and allowed perspiration to evaporate. A single layer was enough during summers.