Simplified retrograde motion, but epicycles were necessary to account for the planets’ changing speed

The distances to the planets could be measured. These distances were ordered, and therefore aesthetically pleasing to the philosophy of the day 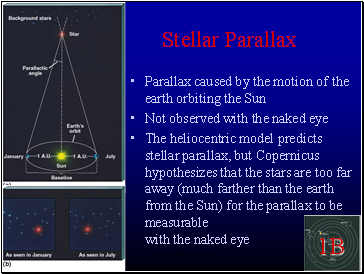 Parallax caused by the motion of the earth orbiting the Sun

Not observed with the naked eye

The heliocentric model predicts stellar parallax, but Copernicus hypothesizes that the stars are too far away (much farther than the earth from the Sun) for the parallax to be measurable with the naked eye 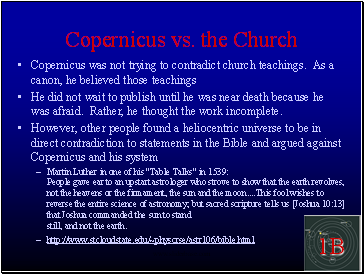 Copernicus vs. the Church

Copernicus was not trying to contradict church teachings. As a canon, he believed those teachings

He did not wait to publish until he was near death because he was afraid. Rather, he thought the work incomplete.

However, other people found a heliocentric universe to be in direct contradiction to statements in the Bible and argued against Copernicus and his system

Martin Luther in one of his "Table Talks" in 1539: People gave ear to an upstart astrologer who strove to show that the earth revolves, not the heavens or the firmament, the sun and the moon This fool wishes to reverse the entire science of astronomy; but sacred scripture tells us [Joshua 10:13] that Joshua commanded the sun to stand still, and not the earth. 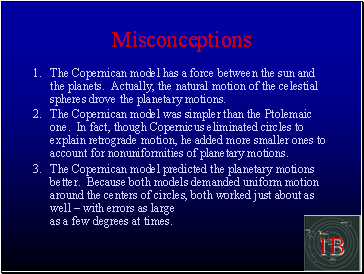 The Copernican model has a force between the sun and the planets. Actually, the natural motion of the celestial spheres drove the planetary motions.

The Copernican model was simpler than the Ptolemaic one. In fact, though Copernicus eliminated circles to explain retrograde motion, he added more smaller ones to account for nonuniformities of planetary motions.

The Copernican model predicted the planetary motions better. Because both models demanded uniform motion around the centers of circles, both worked just about as well – with errors as large as a few degrees at times. 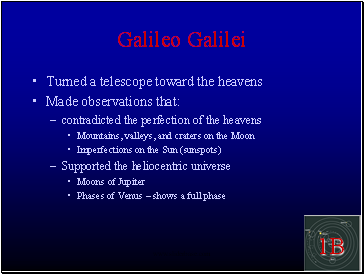 Turned a telescope toward the heavens

contradicted the perfection of the heavens

Mountains, valleys, and craters on the Moon

Imperfections on the Sun (sunspots) 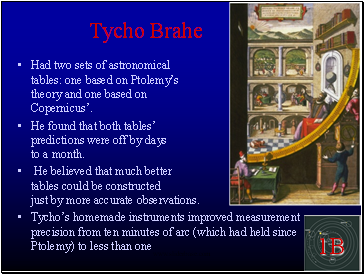