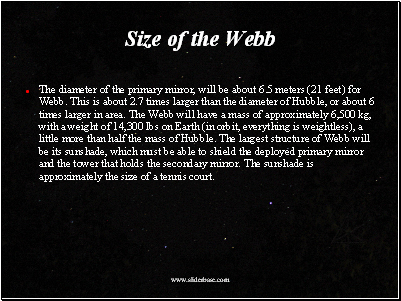 Size of the Webb

The diameter of the primary mirror, will be about 6.5 meters (21 feet) for Webb. This is about 2.7 times larger than the diameter of Hubble, or about 6 times larger in area. The Webb will have a mass of approximately 6,500 kg, with a weight of 14,300 lbs on Earth (in orbit, everything is weightless), a little more than half the mass of Hubble. The largest structure of Webb will be its sunshade, which must be able to shield the deployed primary mirror and the tower that holds the secondary mirror. The sunshade is approximately the size of a tennis court. 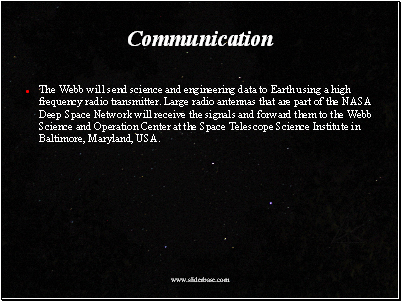 The Webb will send science and engineering data to Earth using a high frequency radio transmitter. Large radio antennas that are part of the NASA Deep Space Network will receive the signals and forward them to the Webb Science and Operation Center at the Space Telescope Science Institute in Baltimore, Maryland, USA. 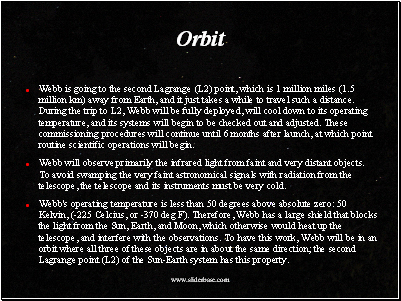 l Webb is going to the second Lagrange (L2) point, which is 1 million miles (1.5 million km) away from Earth, and it just takes a while to travel such a distance. During the trip to L2, Webb will be fully deployed, will cool down to its operating temperature, and its systems will begin to be checked out and adjusted. These commissioning procedures will continue until 6 months after launch, at which point routine scientific operations will begin.

l Webb will observe primarily the infrared light from faint and very distant objects. To avoid swamping the very faint astronomical signals with radiation from the telescope, the telescope and its instruments must be very cold.

l Webb's operating temperature is less than 50 degrees above absolute zero: 50 Kelvin, (-225 Celcius, or -370 deg F). Therefore, Webb has a large shield that blocks the light from the Sun, Earth, and Moon, which otherwise would heat up the telescope, and interfere with the observations. To have this work, Webb will be in an orbit where all three of these objects are in about the same direction; the second Lagrange point (L2) of the Sun-Earth system has this property. 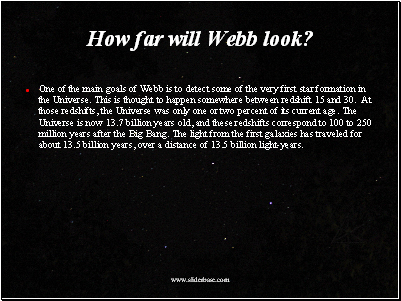 How far will Webb look?

l One of the main goals of Webb is to detect some of the very first star formation in the Universe. This is thought to happen somewhere between redshift 15 and 30. At those redshifts, the Universe was only one or two percent of its current age. The Universe is now 13.7 billion years old, and these redshifts correspond to 100 to 250 million years after the Big Bang. The light from the first galaxies has traveled for about 13.5 billion years, over a distance of 13.5 billion light-years.