The Sun Through Different Filters
Page
2 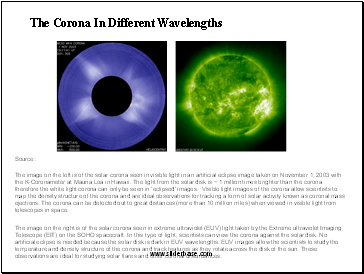 The Corona In Different Wavelengths

The image on the left is of the solar corona seen in visible light in an artificial eclipse image taken on November 1, 2003 with the K-Coronameter at Mauna Loa in Hawaii. The light from the solar disk is ~ 1 million times brighter than the corona therefore the white light corona can only be seen in ‘eclipsed’ images. Visible light images of the corona allow scientists to map the density structure of the corona and are ideal observations for tracking a form of solar activity known as coronal mass ejections. The corona can be detected out to great distances (more than 10 million miles) when viewed in visible light from telescopes in space.

The image on the right is of the solar corona seen in extreme ultraviolet (EUV) light taken by the Extreme ultraviolet Imaging Telescope (EIT) on the SOHO spacecraft. In this type of light, scientists can view the corona against the solar disk. No artificial eclipse is needed because the solar disk is dark in EUV wavelengths. EUV images allow the scientists to study the temperature and density structure of the corona and track features as they rotate across the disk of the sun. These observations are ideal for studying solar flares and other coronal disturbances. 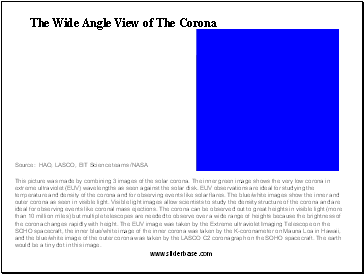 The Wide Angle View of The Corona

This picture was made by combining 3 images of the solar corona. The inner green image shows the very low corona in extreme ultraviolet (EUV) wavelengths as seen against the solar disk. EUV observations are ideal for studying the temperature and density of the corona and for observing events like solar flares. The blue/white images show the inner and outer corona as seen in visible light. Visible light images allow scientists to study the density structure of the corona and are ideal for observing events like coronal mass ejections. The corona can be observed out to great heights in visible light (more than 10 million miles) but multiple telescopes are needed to observe over a wide range of heights because the brightness of the corona changes rapidly with height. The EUV image was taken by the Extreme ultraviolet Imaging Telescope on the SOHO spacecraft, the inner blue/white image of the inner corona was taken by the K-coronameter on Mauna Loa in Hawaii, and the blue/white image of the outer corona was taken by the LASCO C2 coronagraph on the SOHO spacecraft. The earth would be a tiny dot in this image.