The Sun Through Different Filters
Page
4 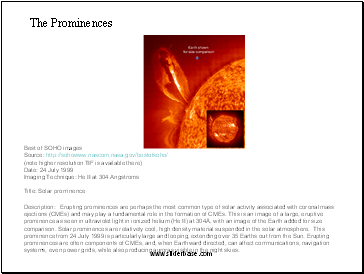 Description: Erupting prominences are perhaps the most common type of solar activity associated with coronal mass ejections (CMEs) and may play a fundamental role in the formation of CMEs. This is an image of a large, eruptive prominence as seen in ultraviolet light in ionized helium (He II) at 304Å, with an image of the Earth added for size comparison. Solar prominences are relatively cool, high density material suspended in the solar atmosphere. This prominence from 24 July 1999 is particularly large and looping, extending over 35 Earths out from the Sun. Erupting prominences are often components of CMEs, and, when Earthward directed, can affect communications, navigation systems, even power grids, while also producing auroras visible in the night skies. 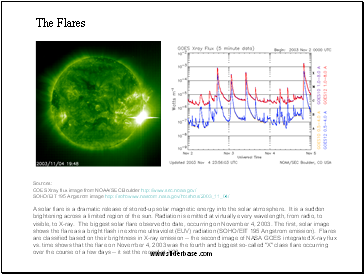 A solar flare is a dramatic release of stored-up solar magnetic energy into the solar atmosphere. It is a sudden brightening across a limited region of the sun. Radiation is emitted at virtually every wavelength, from radio, to visible, to X-ray. The biggest solar flare observed to date, occurring on November 4, 2003. The first, solar image shows the flare as a bright flash in extreme ultraviolet (EUV) radiation (SOHO/EIT 195 Angstrom emission). Flares are classified based on their brightness in X-ray emission -- the second image of NASA GOES integrated X-ray flux vs. time shows that the flare on November 4, 2003 was the fourth and biggest so-called "X" class flare occurring over the course of a few days -- it set the record at X28.
Go to page:
1  2  3  4