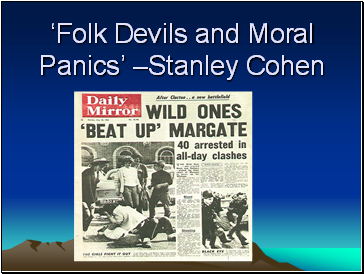 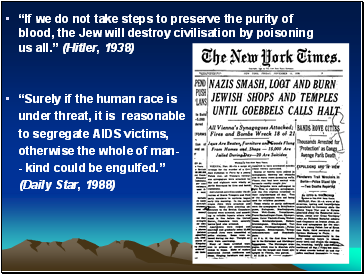 “If we do not take steps to preserve the purity of blood, the Jew will destroy civilisation by poisoning us all.” (Hitler, 1938)

“Surely if the human race is

under threat, it is reasonable

otherwise the whole of man-

- kind could be engulfed.” 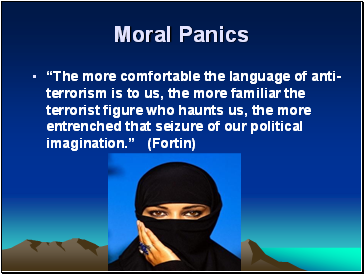 “The more comfortable the language of anti-terrorism is to us, the more familiar the terrorist figure who haunts us, the more entrenched that seizure of our political imagination.” (Fortin) 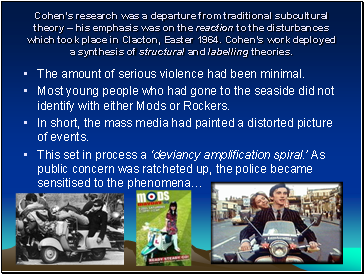 Cohen’s research was a departure from traditional subcultural theory – his emphasis was on the reaction to the disturbances which took place in Clacton, Easter 1964. Cohen’s work deployed a synthesis of structural and labelling theories.

The amount of serious violence had been minimal.

Most young people who had gone to the seaside did not identify with either Mods or Rockers.

In short, the mass media had painted a distorted picture of events.

This set in process a ‘deviancy amplification spiral.’ As public concern was ratcheted up, the police became sensitised to the phenomena… 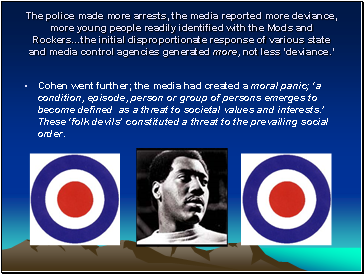 Cohen went further; the media had created a moral panic; ‘a condition, episode, person or group of persons emerges to become defined as a threat to societal values and interests.’ These ‘folk devils’ constituted a threat to the prevailing social order. 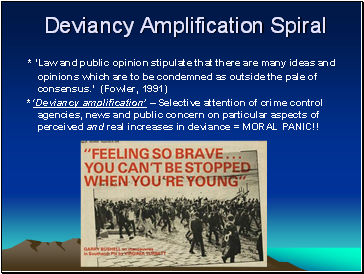 * ‘Law and public opinion stipulate that there are many ideas and opinions which are to be condemned as outside the pale of consensus.’ (Fowler, 1991) 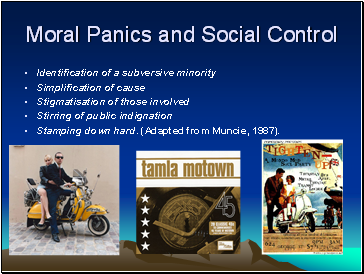 Identification of a subversive minority

Stigmatisation of those involved