It is this that most distinguishes Love Music Hate Racism from the passive spectacles of Band Aid or Live 8.

However well-meaning, these are ‘events.’ They are not designed to mobilise people, or to engineer a shift in political consciousness.

RAR and LMHR have higher ambitions… 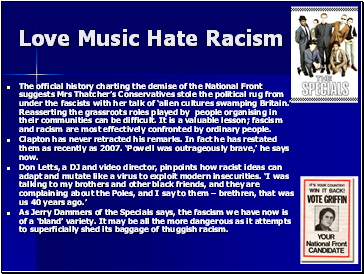 The official history charting the demise of the National Front suggests Mrs Thatcher’s Conservatives stole the political rug from under the fascists with her talk of ‘alien cultures swamping Britain.’ Reasserting the grassroots roles played by people organising in their communities can be difficult. It is a valuable lesson; fascism and racism are most effectively confronted by ordinary people.

Clapton has never retracted his remarks. In fact he has restated them as recently as 2007. ‘Powell was outrageously brave,’ he says now.

Don Letts, a DJ and video director, pinpoints how racist ideas can adapt and mutate like a virus to exploit modern insecurities. ‘I was talking to my brothers and other black friends, and they are complaining about the Poles, and I say to them – brethren, that was us 40 years ago.’

As Jerry Dammers of the Specials says, the fascism we have now is of a ‘bland’ variety. It may be all the more dangerous as it attempts to superficially shed its baggage of thuggish racism.