The prophet Ezekiel believed that Yahweh had used the Babylonian Empire to punish the Israelites for their sins.

Ezekiel preached that Jerusalem was Yahweh’s sacred zone. Over the years, the Jews in exile started to return. Others began to realise that God was everywhere.

An Indian Prince, Siddharta Gautama, also known as Buddha, made it possible to enter the ultimate reality by the practice of meditation and compassion. ( 563 – 483 B.C.E) 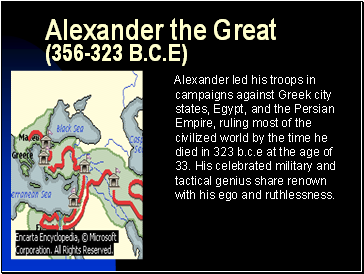 Alexander led his troops in campaigns against Greek city states, Egypt, and the Persian Empire, ruling most of the civilized world by the time he died in 323 b.c.e at the age of 33. His celebrated military and tactical genius share renown with his ego and ruthlessness. 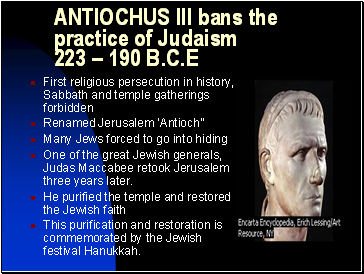 Many Jews forced to go into hiding

He purified the temple and restored the Jewish faith

This purification and restoration is commemorated by the Jewish festival Hanukkah. 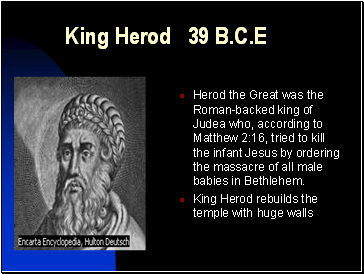 Herod the Great was the Roman-backed king of Judea who, according to Matthew 2:16, tried to kill the infant Jesus by ordering the massacre of all male babies in Bethlehem. 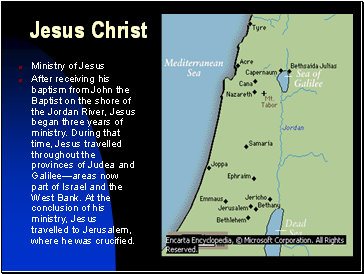 After receiving his baptism from John the Baptist on the shore of the Jordan River, Jesus began three years of ministry. During that time, Jesus travelled throughout the provinces of Judea and Galilee—areas now part of Israel and the West Bank. At the conclusion of his ministry, Jesus travelled to Jerusalem, where he was crucified.