This machine cuts the threads of screws

A bar, the one to have the thread cut into it, would be laid in between the two screws.

As the cranks on the end of the table were turned, the cutting blade would be carried down the two screws, creating an even groove to be used for screws, bolts, etc. 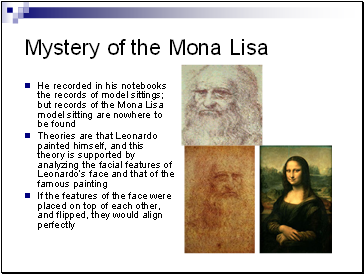 Mystery of the Mona Lisa

Theories are that Leonardo painted himself, and this theory is supported by analyzing the facial features of Leonardo’s face and that of the famous painting

If the features of the face were placed on top of each other, and flipped, they would align perfectly 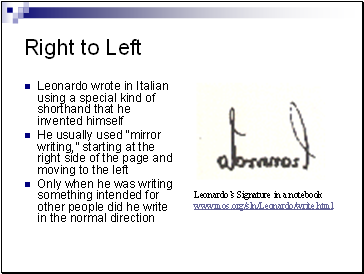 He usually used “mirror writing,” starting at the right side of the page and moving to the left

Leonardo’s Signature in a notebook www.mos.org/sln/Leonardo/write.html