Such implants may be temporary or permenant depending on the implant and the tumour itself.

The benefit of such a method is that the tumour receives nearly all of the dose whilst healthy tissue hardly receives any. 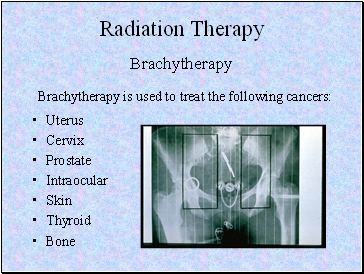 Brachytherapy is used to treat the following cancers: 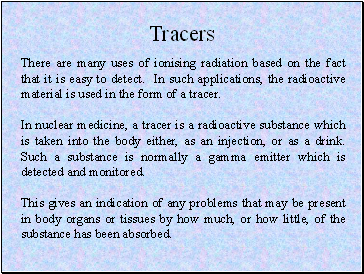 There are many uses of ionising radiation based on the fact that it is easy to detect. In such applications, the radioactive material is used in the form of a tracer.

In nuclear medicine, a tracer is a radioactive substance which is taken into the body either, as an injection, or as a drink. Such a substance is normally a gamma emitter which is detected and monitored.

This gives an indication of any problems that may be present in body organs or tissues by how much, or how little, of the substance has been absorbed. 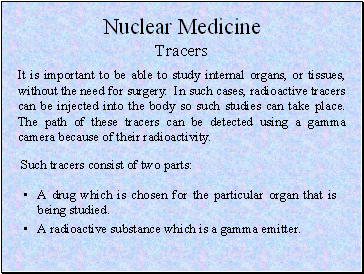 A drug which is chosen for the particular organ that is being studied.

A radioactive substance which is a gamma emitter.

It is important to be able to study internal organs, or tissues, without the need for surgery. In such cases, radioactive tracers can be injected into the body so such studies can take place. The path of these tracers can be detected using a gamma camera because of their radioactivity.

Such tracers consist of two parts: 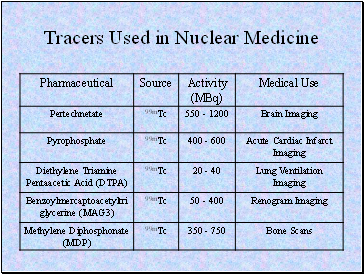 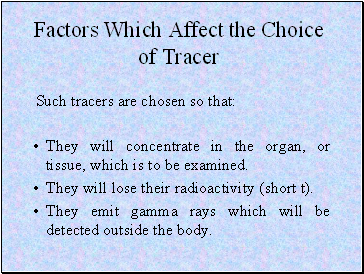 They will concentrate in the organ, or tissue, which is to be examined.

They will lose their radioactivity (short t).

They emit gamma rays which will be detected outside the body.

Such tracers are chosen so that: 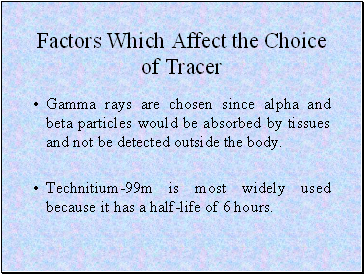 Gamma rays are chosen since alpha and beta particles would be absorbed by tissues and not be detected outside the body.

Technitium-99m is most widely used because it has a half-life of 6 hours. 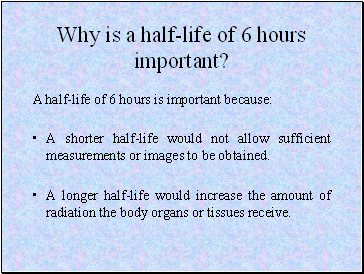 Why is a half-life of 6 hours important?

A shorter half-life would not allow sufficient measurements or images to be obtained.

A longer half-life would increase the amount of radiation the body organs or tissues receive.

A half-life of 6 hours is important because: