Power and measuring it
Page
4 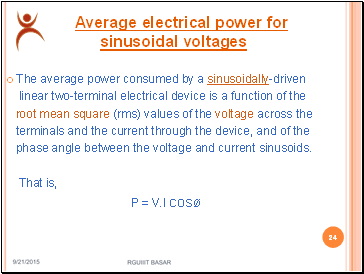 The average power consumed by a sinusoidally-driven

linear two-terminal electrical device is a function of the

root mean square (rms) values of the voltage across the

terminals and the current through the device, and of the

phase angle between the voltage and current sinusoids. 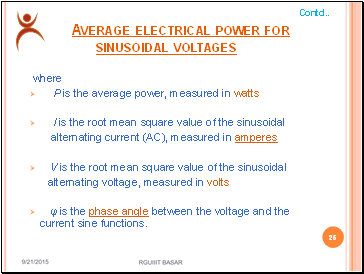 P is the average power, measured in watts

I is the root mean square value of the sinusoidal

V is the root mean square value of the sinusoidal

φ is the phase angle between the voltage and the current sine functions. 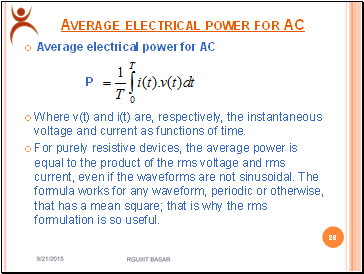 Where v(t) and i(t) are, respectively, the instantaneous voltage and current as functions of time.

For purely resistive devices, the average power is equal to the product of the rms voltage and rms current, even if the waveforms are not sinusoidal. The formula works for any waveform, periodic or otherwise, that has a mean square; that is why the rms formulation is so useful. 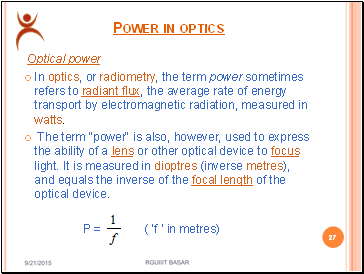 In optics, or radiometry, the term power sometimes refers to radiant flux, the average rate of energy transport by electromagnetic radiation, measured in watts.

The term "power" is also, however, used to express the ability of a lens or other optical device to focus light. It is measured in dioptres (inverse metres), and equals the inverse of the focal length of the optical device. 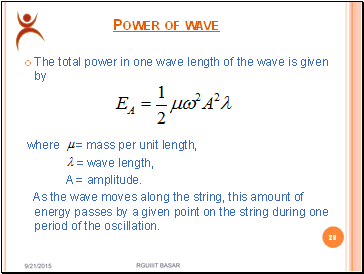 where = mass per unit length,

As the wave moves along the string, this amount of energy passes by a given point on the string during one period of the oscillation. 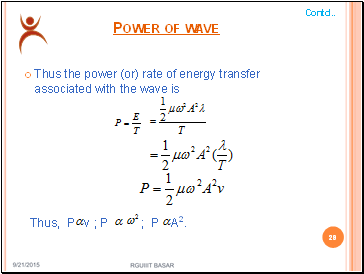