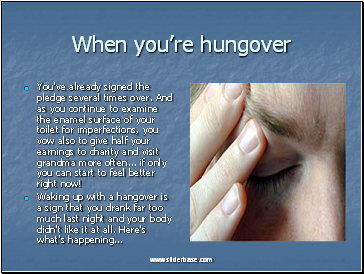 You've already signed the pledge several times over. And as you continue to examine the enamel surface of your toilet for imperfections, you vow also to give half your earnings to charity and visit grandma more often . if only you can start to feel better right now!

Waking up with a hangover is a sign that you drank far too much last night and your body didn't like it at all. Here's what's happening . 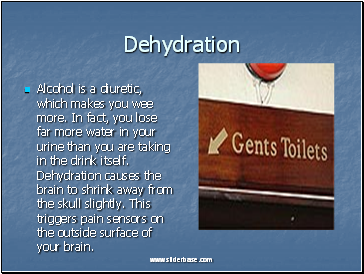 Alcohol is a diuretic, which makes you wee more. In fact, you lose far more water in your urine than you are taking in the drink itself. Dehydration causes the brain to shrink away from the skull slightly. This triggers pain sensors on the outside surface of your brain. 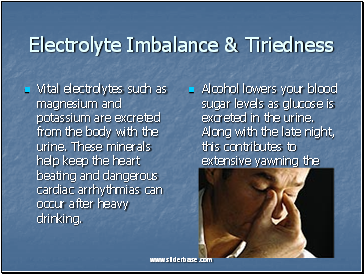 Vital electrolytes such as magnesium and potassium are excreted from the body with the urine. These minerals help keep the heart beating and dangerous cardiac arrhythias can occur after heavy drinking.

Alcohol lowers your blood sugar levels as glucose is excreted in the urine. Along with the late night, this contributes to extensive yawning the following day. 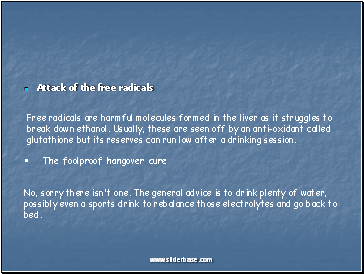 Attack of the free radicals

Free radicals are harmful molecules formed in the liver as it struggles to break down ethanol. Usually, these are seen off by an anti-oxidant called glutathione but its reserves can run low after a drinking session.

No, sorry there isn't one. The general advice is to drink plenty of water, possibly even a sports drink to rebalance those electrolytes and go back to bed. 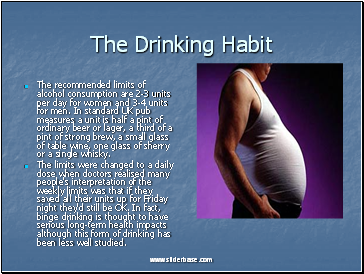 The recommended limits of alcohol consumption are 2-3 units per day for women and 3-4 units for men. In standard UK pub measures a unit is half a pint of ordinary beer or lager, a third of a pint of strong brew, a small glass of table wine, one glass of sherry or a single whisky.

The limits were changed to a daily dose when doctors realised many people's interpretation of the weekly limits was that if they saved all their units up for Friday night they'd still be OK. In fact, binge drinking is thought to have serious long-term health impacts although this form of drinking has been less well studied. 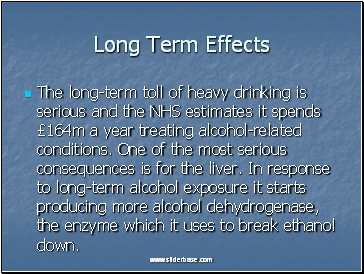 The long-term toll of heavy drinking is serious and the NHS estimates it spends £164m a year treating alcohol-related conditions. One of the most serious consequences is for the liver. In response to long-term alcohol exposure it starts producing more alcohol dehydrogenase, the enzyme which it uses to break ethanol down.