Nubian writing was similar to Egyptian writing but developed into a completely separate language later in time. 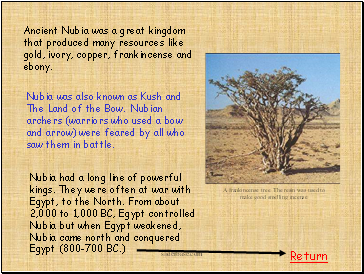 Ancient Nubia was a great kingdom that produced many resources like gold, ivory, copper, frankincense and ebony.

Nubia was also known as Kush and The Land of the Bow. Nubian archers (warriors who used a bow and arrow) were feared by all who saw them in battle.

Nubia had a long line of powerful kings. They were often at war with Egypt, to the North. From about 2,000 to 1,000 BC, Egypt controlled Nubia but when Egypt weakened, Nubia came north and conquered Egypt (800-700 BC.)

A frankincense tree. The resin was used to make good smelling incense. 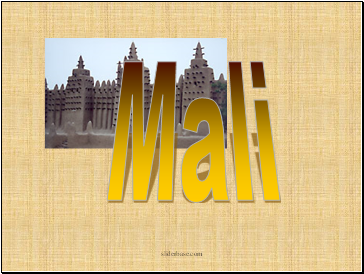 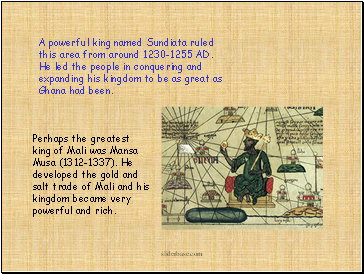 A powerful king named Sundiata ruled this area from around 1230-1255 AD. He led the people in conquering and expanding his kingdom to be as great as Ghana had been.

Perhaps the greatest king of Mali was Mansa Musa (1312-1337). He developed the gold and salt trade of Mali and his kingdom became very powerful and rich. 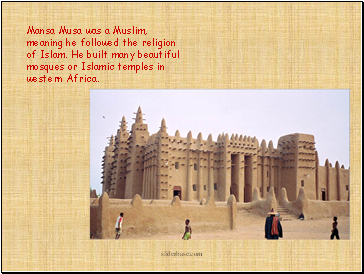 Mansa Musa was a Muslim, meaning he followed the religion of Islam. He built many beautiful mosques or Islamic temples in western Africa. 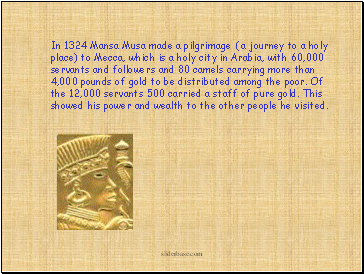 In 1324 Mansa Musa made a pilgrimage ( a journey to a holy place) to Mecca, which is a holy city in Arabia, with 60,000 servants and followers and 80 camels carrying more than 4,000 pounds of gold to be distributed among the poor. Of the 12,000 servants 500 carried a staff of pure gold. This showed his power and wealth to the other people he visited. 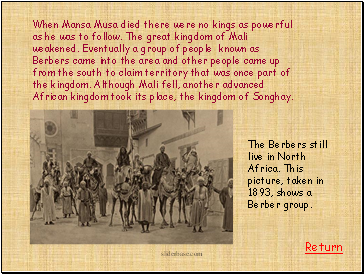 When Mansa Musa died there were no kings as powerful as he was to follow. The great kingdom of Mali weakened. Eventually a group of people known as Berbers came into the area and other people came up from the south to claim territory that was once part of the kingdom. Although Mali fell, another advanced African kingdom took its place, the kingdom of Songhay.

The Berbers still live in North Africa. This picture, taken in 1893, shows a Berber group. 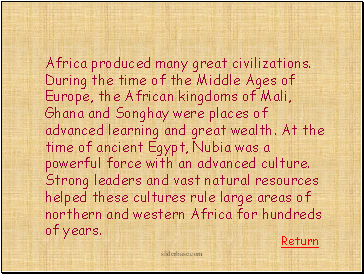 Africa produced many great civilizations. During the time of the Middle Ages of Europe, the African kingdoms of Mali, Ghana and Songhay were places of advanced learning and great wealth. At the time of ancient Egypt, Nubia was a powerful force with an advanced culture. Strong leaders and vast natural resources helped these cultures rule large areas of northern and western Africa for hundreds of years.