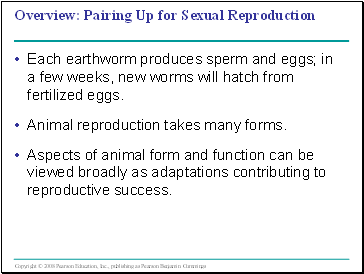 Pairing Up for Sexual Reproduction

Each earthworm produces sperm and eggs; in a few weeks, new worms will hatch from fertilized eggs.

Aspects of animal form and function can be viewed broadly as adaptations contributing to reproductive success. 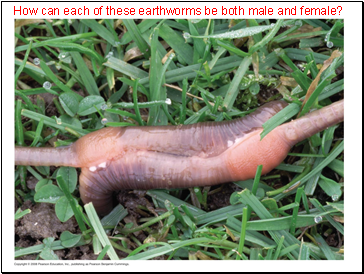 How can each of these earthworms be both male and female? 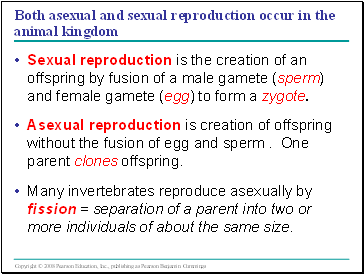 Both asexual and sexual reproduction occur in the animal kingdom

Sexual reproduction is the creation of an offspring by fusion of a male gamete (sperm) and female gamete (egg) to form a zygote.

Asexual reproduction is creation of offspring without the fusion of egg and sperm . One parent clones offspring.

Many invertebrates reproduce asexually by fission = separation of a parent into two or more individuals of about the same size. 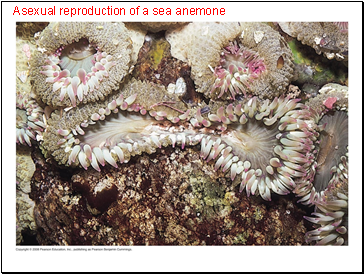 Asexual reproduction of a sea anemone 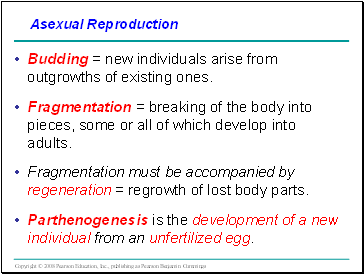 Budding = new individuals arise from outgrowths of existing ones.

Fragmentation = breaking of the body into pieces, some or all of which develop into adults.

Fragmentation must be accompanied by regeneration = regrowth of lost body parts.

Parthenogenesis is the development of a new individual from an unfertilized egg. 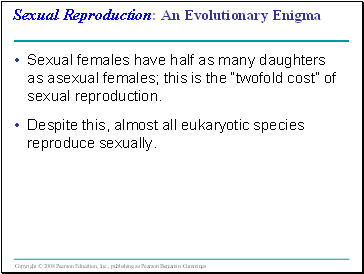 Sexual females have half as many daughters as asexual females; this is the “twofold cost” of sexual reproduction.

Despite this, almost all eukaryotic species reproduce sexually. 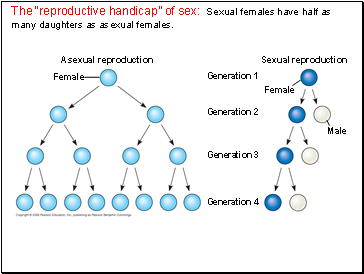 The “reproductive handicap” of sex: Sexual females have half as many daughters as asexual females. 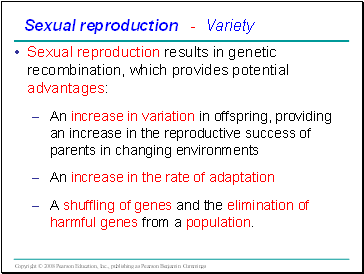 An increase in variation in offspring, providing an increase in the reproductive success of parents in changing environments

An increase in the rate of adaptation

A shuffling of genes and the elimination of harmful genes from a population. 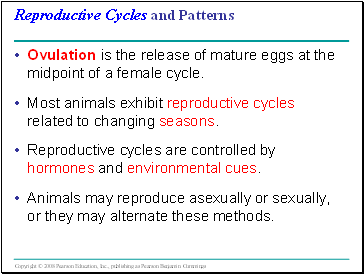