Phases of the Moon
Page
1

Presentations / Astronomy / Phases of the Moon 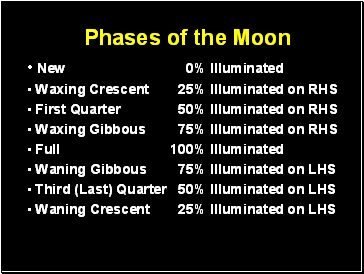 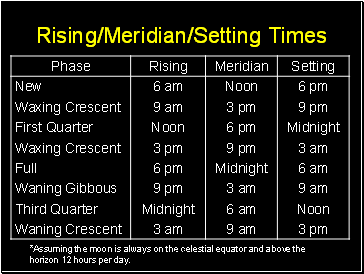 *Assuming the moon is always on the celestial equator and above the horizon 12 hours per day. 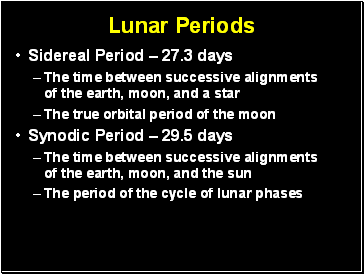 The time between successive alignments of the earth, moon, and a star

The true orbital period of the moon

The time between successive alignments of the earth, moon, and the sun

The period of the cycle of lunar phases 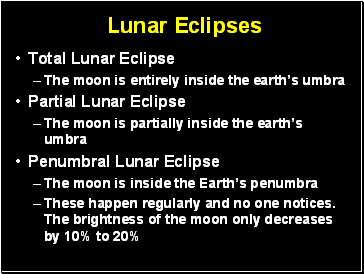 The moon is entirely inside the earth’s umbra

The moon is partially inside the earth’s umbra

The moon is inside the Earth’s penumbra

These happen regularly and no one notices. The brightness of the moon only decreases by 10% to 20% 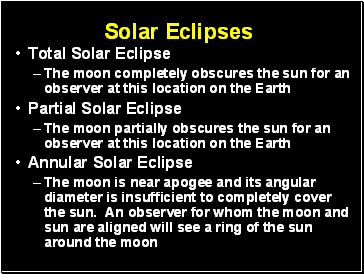 The moon is near apogee and its angular diameter is insufficient to completely cover the sun. An observer for whom the moon and sun are aligned will see a ring of the sun around the moon 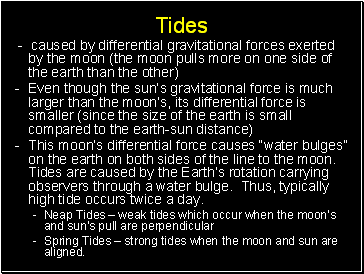 Even though the sun’s gravitational force is much larger than the moon’s, its differential force is smaller (since the size of the earth is small compared to the earth-sun distance)

This moon’s differential force causes “water bulges” on the earth on both sides of the line to the moon. Tides are caused by the Earth’s rotation carrying observers through a water bulge. Thus, typically high tide occurs twice a day.

Spring Tides – strong tides when the moon and sun are aligned.