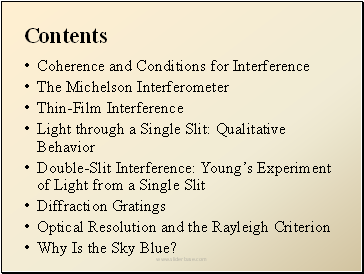 Double-Slit Interference: Young’s Experiment of Light from a Single Slit

Optical Resolution and the Rayleigh Criterion

Why Is the Sky Blue? 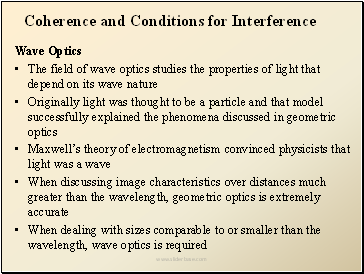 When discussing image characteristics over distances much greater than the wavelength, geometric optics is extremely accurate

When dealing with sizes comparable to or smaller than the wavelength, wave optics is required 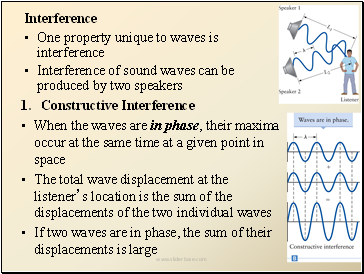 One property unique to waves is interference

Interference of sound waves can be produced by two speakers

When the waves are in phase, their maxima occur at the same time at a given point in space

If two waves are in phase, the sum of their displacements is large 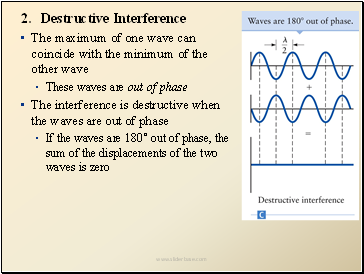 These waves are out of phase

The interference is destructive when the waves are out of phase

If the waves are 180° out of phase, the sum of the displacements of the two waves is zero 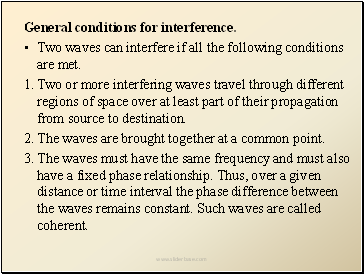 Two waves can interfere if all the following conditions are met.

1. Two or more interfering waves travel through different regions of space over at least part of their propagation from source to destination.

2. The waves are brought together at a common point.

3. The waves must have the same frequency and must also have a fixed phase relationship. Thus, over a given distance or time interval the phase difference between the waves remains constant. Such waves are called coherent. 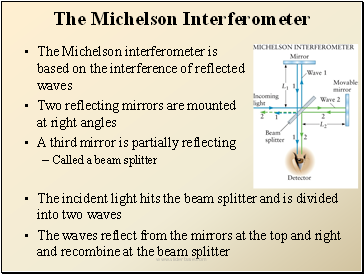 The Michelson interferometer is based on the interference of reflected waves