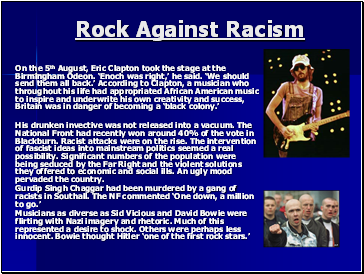 On the 5th August, Eric Clapton took the stage at the Birmingham Odeon. ‘Enoch was right,’ he said. ‘We should send them all back.’ According to Clapton, a musician who throughout his life had appropriated African American music to inspire and underwrite his own creativity and success, Britain was in danger of becoming a ‘black colony.’

His drunken invective was not released into a vacuum. The National Front had recently won around 40% of the vote in Blackburn. Racist attacks were on the rise. The intervention of fascist ideas into mainstream politics seemed a real possibility. Significant numbers of the population were being seduced by the Far Right and the violent solutions they offered to economic and social ills. An ugly mood pervaded the country.

Gurdip Singh Chaggar had been murdered by a gang of racists in Southall. The NF commented ‘One down, a million to go.’

Musicians as diverse as Sid Vicious and David Bowie were flirting with Nazi imagery and rhetoric. Much of this represented a desire to shock. Others were perhaps less innocent. Bowie thought Hitler ‘one of the first rock stars.’ 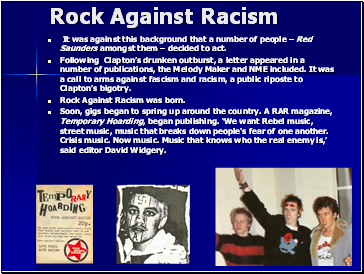 It was against this background that a number of people – Red Saunders amongst them – decided to act.

Following Clapton’s drunken outburst, a letter appeared in a number of publications, the Melody Maker and NME included. It was a call to arms against fascism and racism, a public riposte to Clapton’s bigotry.

Rock Against Racism was born.

Soon, gigs began to spring up around the country. A RAR magazine, Temporary Hoarding, began publishing. ‘We want Rebel music, street music, music that breaks down people's fear of one another. Crisis music. Now music. Music that knows who the real enemy is,’ said editor David Widgery. 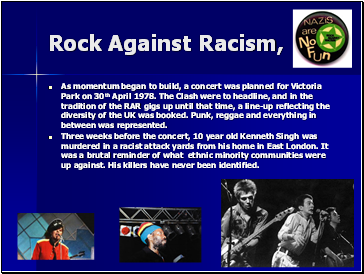 As momentum began to build, a concert was planned for Victoria Park on 30th April 1978. The Clash were to headline, and in the tradition of the RAR gigs up until that time, a line-up reflecting the diversity of the UK was booked. Punk, reggae and everything in between was represented.

Three weeks before the concert, 10 year old Kenneth Singh was murdered in a racist attack yards from his home in East London. It was a brutal reminder of what ethnic minority communities were up against. His killers have never been identified. 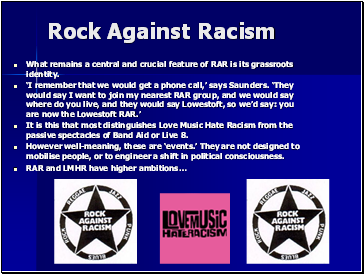 What remains a central and crucial feature of RAR is its grassroots identity.

‘I remember that we would get a phone call,’ says Saunders. ‘They would say I want to join my nearest RAR group, and we would say where do you live, and they would say Lowestoft, so we’d say: you are now the Lowestoft RAR.’