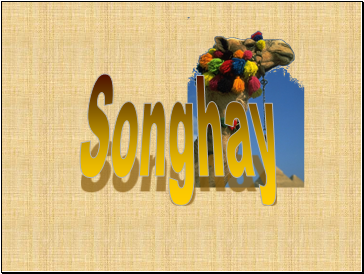 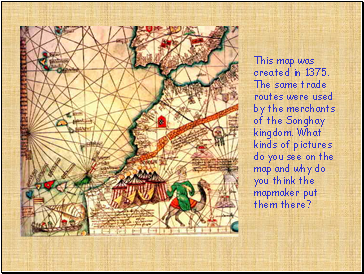 This map was created in 1375. The same trade routes were used by the merchants of the Songhay kingdom. What kinds of pictures do you see on the map and why do you think the mapmaker put them there? 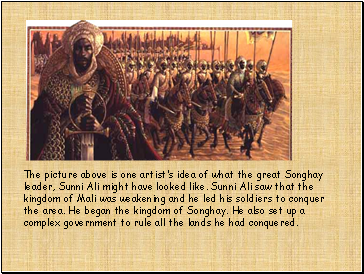 The picture above is one artist’s idea of what the great Songhay leader, Sunni Ali might have looked like. Sunni Ali saw that the kingdom of Mali was weakening and he led his soldiers to conquer the area. He began the kingdom of Songhay. He also set up a complex government to rule all the lands he had conquered. 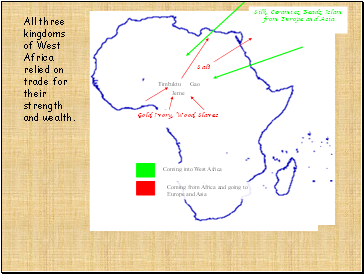 All three kingdoms of West Africa relied on trade for their strength and wealth.

Coming from Africa and going to Europe and Asia 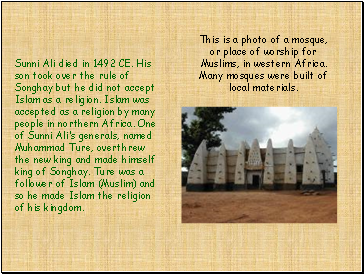 Sunni Ali died in 1492 CE. His son took over the rule of Songhay but he did not accept Islam as a religion. Islam was accepted as a religion by many people in northern Africa. One of Sunni Ali’s generals, named Muhammad Ture, overthrew the new king and made himself king of Songhay. Ture was a follower of Islam (Muslim) and so he made Islam the religion of his kingdom.

This is a photo of a mosque, or place of worship for Muslims, in western Africa. Many mosques were built of local materials. 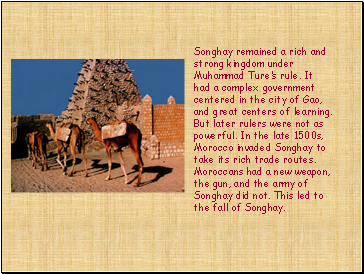 Songhay remained a rich and strong kingdom under Muhammad Ture’s rule. It had a complex government centered in the city of Gao, and great centers of learning. But later rulers were not as powerful. In the late 1500s, Morocco invaded Songhay to take its rich trade routes. Moroccans had a new weapon, the gun, and the army of Songhay did not. This led to the fall of Songhay.