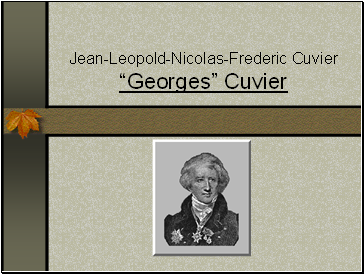 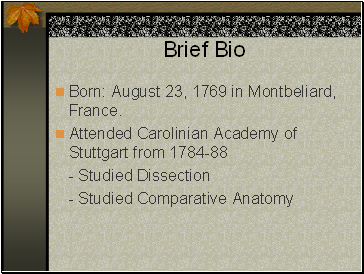 Attended Carolinian Academy of Stuttgart from 1784-88 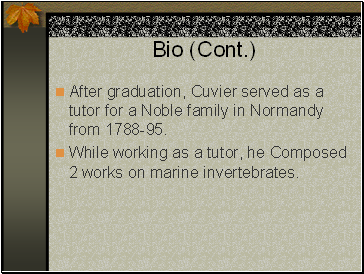 After graduation, Cuvier served as a tutor for a Noble family in Normandy from 1788-95.

While working as a tutor, he Composed 2 works on marine invertebrates. 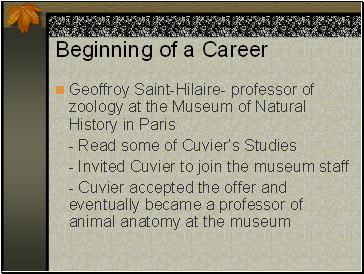 Beginning of a Career

- Read some of Cuvier’s Studies 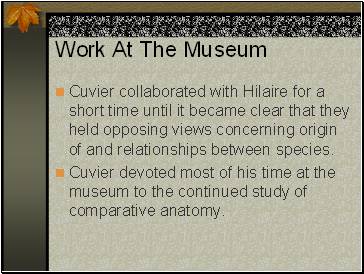 Work At The Museum

Cuvier collaborated with Hilaire for a short time until it became clear that they held opposing views concerning origin of and relationships between species.

Cuvier devoted most of his time at the museum to the continued study of comparative anatomy. 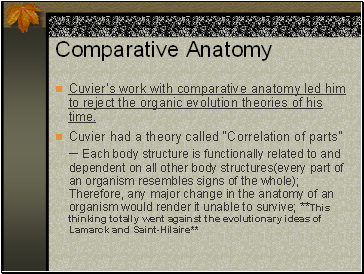 Cuvier’s work with comparative anatomy led him to reject the organic evolution theories of his time.

Cuvier had a theory called “Correlation of parts” – Each body structure is functionally related to and dependent on all other body structures(every part of an organism resembles signs of the whole); Therefore, any major change in the anatomy of an organism would render it unable to survive; **This thinking totally went against the evolutionary ideas of Lamarck and Saint-Hilaire** 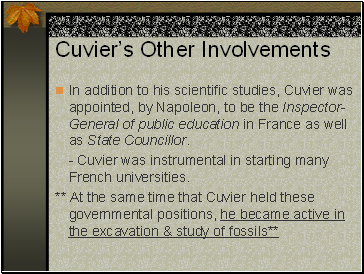 In addition to his scientific studies, Cuvier was appointed, by Napoleon, to be the Inspector-General of public education in France as well as State Councillor.

- Cuvier was instrumental in starting many French universities.

** At the same time that Cuvier held these governmental positions, he became active in the excavation & study of fossils** 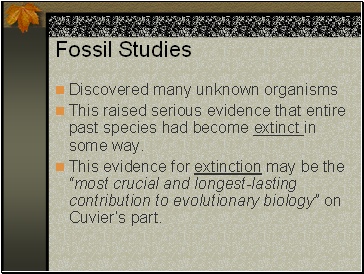 This raised serious evidence that entire past species had become extinct in some way.

This evidence for extinction may be the “most crucial and longest-lasting contribution to evolutionary biology” on Cuvier’s part.