They transferred them to medium containing N14.

After allowing cells to grow in the presence of N14 for varying periods of time, the DNA was extracted and analyzed in CsCl equilibrium density gradient.

The results of their expt. are only consistent with semiconservative model. 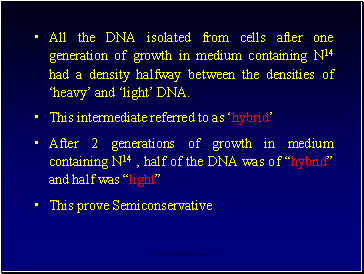 All the DNA isolated from cells after one generation of growth in medium containing N14 had a density halfway between the densities of ‘heavy’ and ‘light’ DNA.

This intermediate referred to as ‘hybrid’

After 2 generations of growth in medium containing N14 , half of the DNA was of “hybrid” and half was “light” 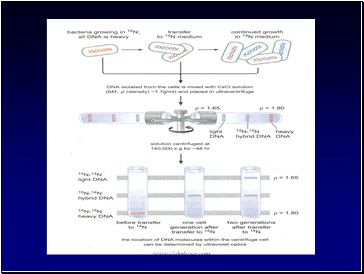 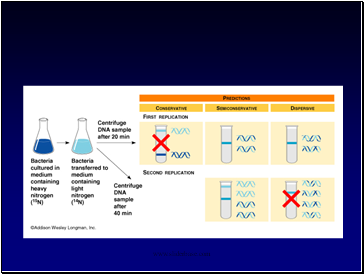 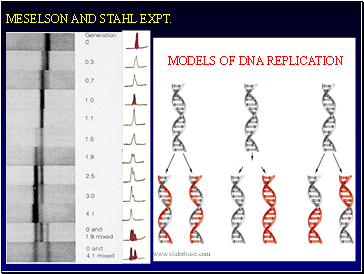 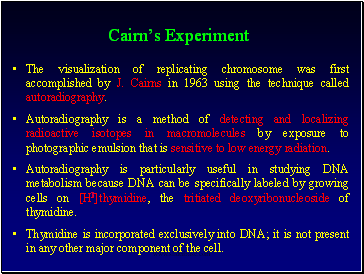 The visualization of replicating chromosome was first accomplished by J. Cairns in 1963 using the technique called autoradiography.

Autoradiography is a method of detecting and localizing radioactive isotopes in macromolecules by exposure to photographic emulsion that is sensitive to low energy radiation.

Autoradiography is particularly useful in studying DNA metabolism because DNA can be specifically labeled by growing cells on [H3]thymidine, the tritiated deoxyribonucleoside of thymidine.

Thymidine is incorporated exclusively into DNA; it is not present in any other major component of the cell. 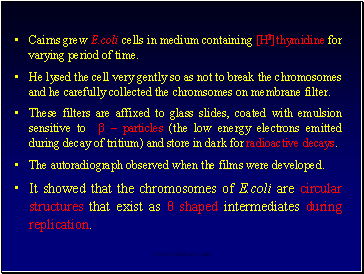 He lysed the cell very gently so as not to break the chromosomes and he carefully collected the chromsomes on membrane filter.

These filters are affixed to glass slides, coated with emulsion sensitive to β – particles (the low energy electrons emitted during decay of tritium) and store in dark for radioactive decays.

The autoradiograph observed when the films were developed.

It showed that the chromosomes of E.coli are circular structures that exist as θ shaped intermediates during replication. 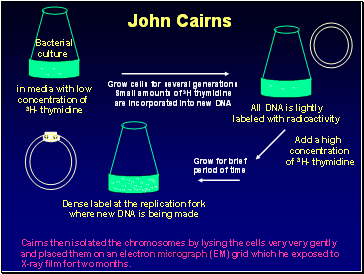 Cairns then isolated the chromosomes by lysing the cells very very gently and placed them on an electron micrograph (EM) grid which he exposed to X-ray film for two months. 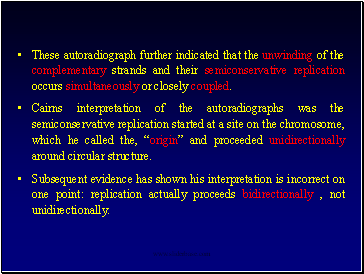 These autoradiograph further indicated that the unwinding of the complementary strands and their semiconservative replication occurs simultaneously or closely coupled.