Plants- why study them
Page
1

Presentations / Plants, Animals, and Ecosystems / Plants- why study them 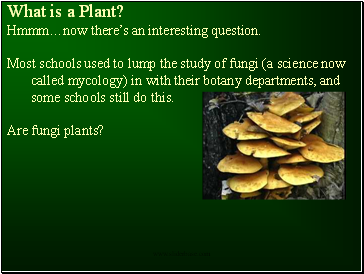 Most schools used to lump the study of fungi (a science now called mycology) in with their botany departments, and some schools still do this. 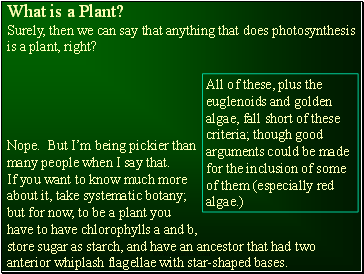 Surely, then we can say that anything that does photosynthesis

is a plant, right?

Nope. But I’m being pickier than

many people when I say that.

If you want to know much more

about it, take systematic botany;

but for now, to be a plant you

have to have chlorophylls a and b,

store sugar as starch, and have an ancestor that had two

All of these, plus the euglenoids and golden algae, fall short of these criteria; though good arguments could be made for the inclusion of some of them (especially red algae.) 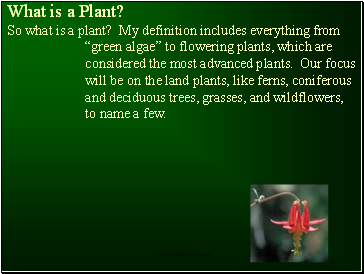 So what is a plant? My definition includes everything from “green algae” to flowering plants, which are considered the most advanced plants. Our focus will be on the land plants, like ferns, coniferous and deciduous trees, grasses, and wildflowers, to name a few. 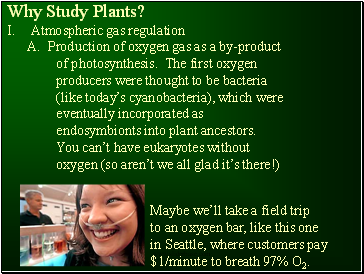 A. Production of oxygen gas as a by-product

of photosynthesis. The first oxygen

producers were thought to be bacteria

You can’t have eukaryotes without

oxygen (so aren’t we all glad it’s there!)

in Seattle, where customers pay 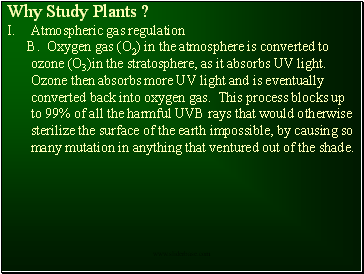 B. Oxygen gas (O2) in the atmosphere is converted to ozone (O3)in the stratosphere, as it absorbs UV light. Ozone then absorbs more UV light and is eventually converted back into oxygen gas. This process blocks up to 99% of all the harmful UVB rays that would otherwise sterilize the surface of the earth impossible, by causing so many mutation in anything that ventured out of the shade. 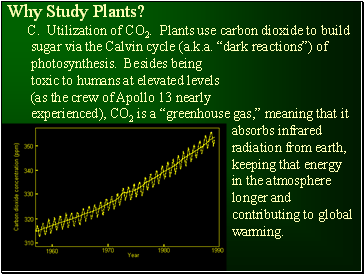 C. Utilization of CO2. Plants use carbon dioxide to build sugar via the Calvin cycle (a.k.a. “dark reactions”) of photosynthesis. Besides being

toxic to humans at elevated levels

(as the crew of Apollo 13 nearly

experienced), CO2 is a “greenhouse gas,” meaning that it