Facts about Our Solar System
Page
2

It has no magnetic field 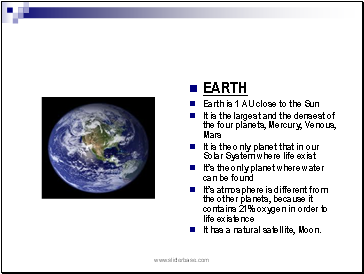 Earth is 1 AU close to the Sun

It is the largest and the densest of the four planets, Mercury, Venous, Mars

It’s the only planet where water can be found

It’s atmosphere is different from the other planets, because it contains 21% oxygen in order to life existence

It has a natural satellite, Moon. 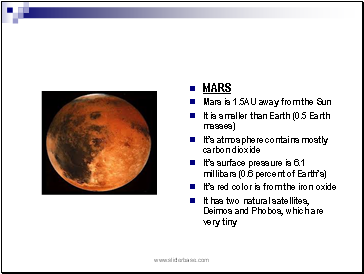 Mars is 1.5AU away from the Sun

It is smaller than Earth (0.5 Earth masses)

It’s red color is from the iron oxide

It has two natural satellites, Deimos and Phobos, which are very tiny 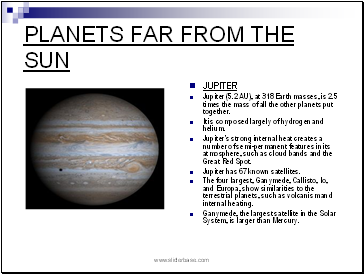 PLANETS FAR FROM THE SUN

It is composed largely of hydrogen and helium.

Jupiter's strong internal heat creates a number of semi-permanent features in its atmosphere, such as cloud bands and the Great Red Spot.

The four largest, Ganymede, Callisto, Io, and Europa, show similarities to the terrestrial planets, such as volcanism and internal heating.

Ganymede, the largest satellite in the Solar System, is larger than Mercury. 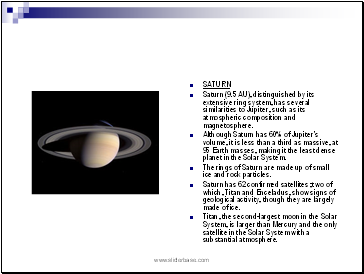 Saturn (9.5 AU), distinguished by its extensive ring system, has several similarities to Jupiter, such as its atmospheric composition and magnetosphere.

Although Saturn has 60% of Jupiter's volume, it is less than a third as massive, at 95 Earth masses, making it the least dense planet in the Solar System.

The rings of Saturn are made up of small ice and rock particles.

Saturn has 62 confirmed satellites; two of which, Titan and Enceladus, show signs of geological activity, though they are largely made of ice. 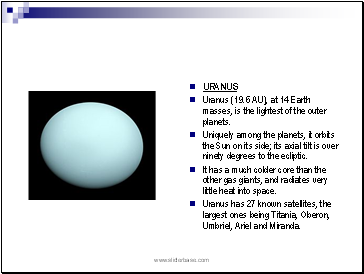 Uniquely among the planets, it orbits the Sun on its side; its axial tilt is over ninety degrees to the ecliptic.

It has a much colder core than the other gas giants, and radiates very little heat into space.

Uranus has 27 known satellites, the largest ones being Titania, Oberon, Umbriel, Ariel and Miranda.