Facts about Our Solar System
Page
3 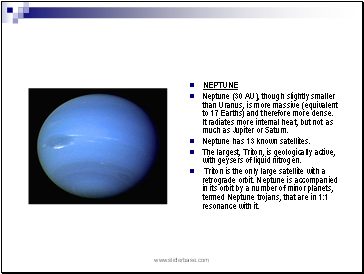 Neptune (30 AU), though slightly smaller than Uranus, is more massive (equivalent to 17 Earths) and therefore more dense. It radiates more internal heat, but not as much as Jupiter or Saturn.

The largest, Triton, is geologically active, with geysers of liquid nitrogen.

Triton is the only large satellite with a retrograde orbit. Neptune is accompanied in its orbit by a number of minor planets, termed Neptune trojans, that are in 1:1 resonance with it. 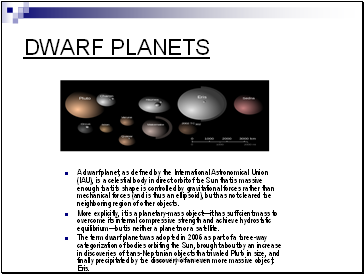 A dwarf planet, as defined by the International Astronomical Union (IAU), is a celestial body in direct orbit of the Sun that is massive enough that its shape is controlled by gravitational forces rather than mechanical forces (and is thus an ellipsoid), but has not cleared the neighboring region of other objects.

More explicitly, it is a planetary-mass object—it has sufficient mass to overcome its internal compressive strength and achieve hydrostatic equilibrium—but is neither a planet nor a satellite.

The term dwarf planet was adopted in 2006 as part of a three-way categorization of bodies orbiting the Sun, brought about by an increase in discoveries of trans-Neptunian objects that rivaled Pluto in size, and finally precipitated by the discovery of an even more massive object, Eris. 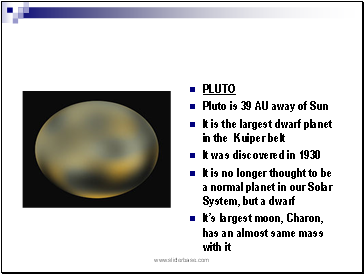 It is the largest dwarf planet in the Kuiper belt

It is no longer thought to be a normal planet in our Solar System, but a dwarf

It’s largest moon, Charon, has an almost same mass with it 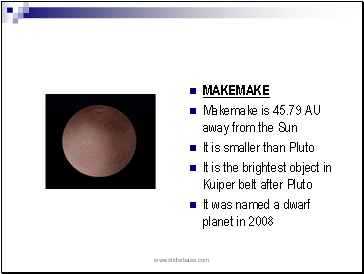 It is smaller than Pluto

It is the brightest object in Kuiper belt after Pluto 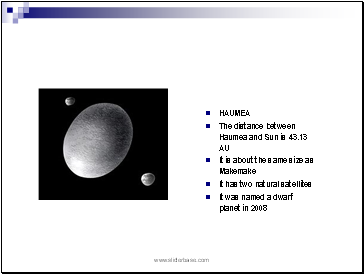 The distance between Haumea and Sun is 43.13 AU

It is about the same size as Makemake

It has two natural satellites