Burr decided to run for governor of New York. Hamilton criticized Burr; Burr challenged Hamilton to a duel; Burr shoots and kills Hamilton. Burr’s term as Vice President was not quite over at the time of the duel. 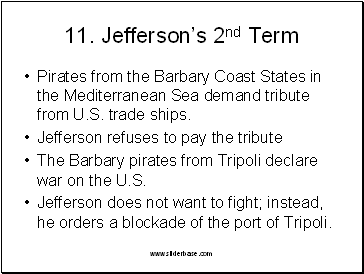 Pirates from the Barbary Coast States in the Mediterranean Sea demand tribute from U.S. trade ships.

Jefferson refuses to pay the tribute

The Barbary pirates from Tripoli declare war on the U.S.

Jefferson does not want to fight; instead, he orders a blockade of the port of Tripoli. 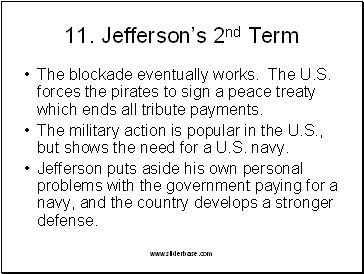 The blockade eventually works. The U.S. forces the pirates to sign a peace treaty which ends all tribute payments.

The military action is popular in the U.S., but shows the need for a U.S. navy.

Jefferson puts aside his own personal problems with the government paying for a navy, and the country develops a stronger defense. 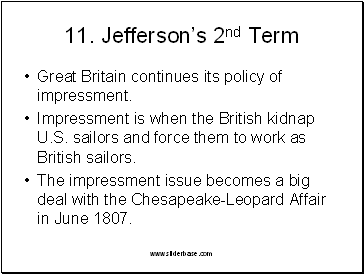 Impressment is when the British kidnap U.S. sailors and force them to work as British sailors.

The impressment issue becomes a big deal with the Chesapeake-Leopard Affair in June 1807. 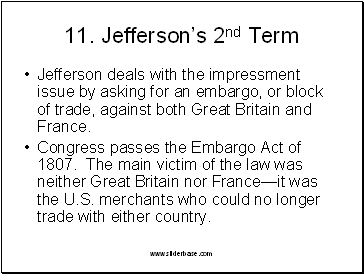 Jefferson deals with the impressment issue by asking for an embargo, or block of trade, against both Great Britain and France.

Congress passes the Embargo Act of 1807. The main victim of the law was neither Great Britain nor France—it was the U.S. merchants who could no longer trade with either country. 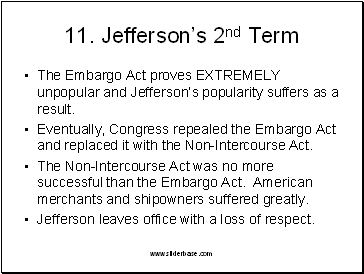 The Embargo Act proves EXTREMELY unpopular and Jefferson’s popularity suffers as a result.

Eventually, Congress repealed the Embargo Act and replaced it with the Non-Intercourse Act.

The Non-Intercourse Act was no more successful than the Embargo Act. American merchants and shipowners suffered greatly.

Jefferson leaves office with a loss of respect. 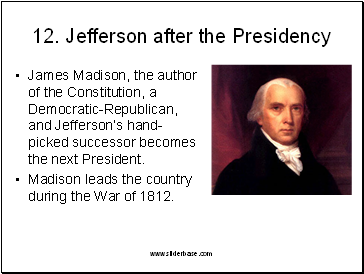 Jefferson after the Presidency

James Madison, the author of the Constitution, a Democratic-Republican, and Jefferson’s hand-picked successor becomes the next President.

Madison leads the country during the War of 1812. 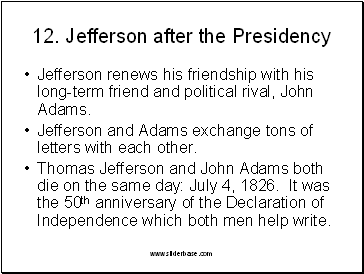