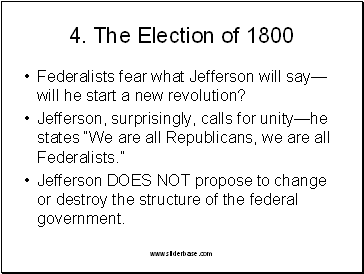 Federalists fear what Jefferson will say—will he start a new revolution?

Jefferson, surprisingly, calls for unity—he states “We are all Republicans, we are all Federalists.”

Jefferson DOES NOT propose to change or destroy the structure of the federal government. 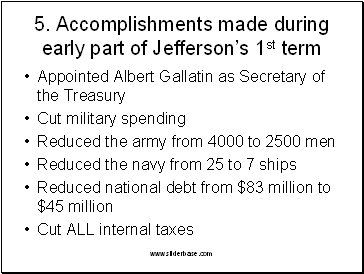 Accomplishments made during early part of Jefferson’s 1st term

Appointed Albert Gallatin as Secretary of the Treasury

Reduced the navy from 25 to 7 ships 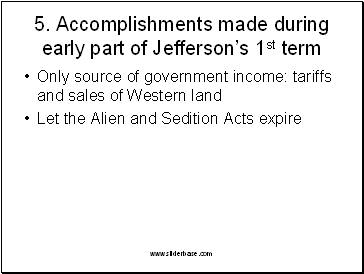 5. Accomplishments made during early part of Jefferson’s 1st term

Only source of government income: tariffs and sales of Western land 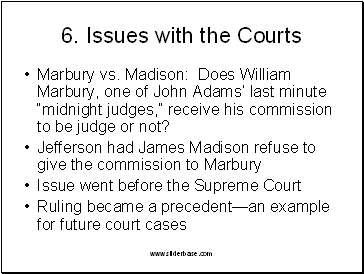 Issues with the Courts

Marbury vs. Madison: Does William Marbury, one of John Adams’ last minute “midnight judges,” receive his commission to be judge or not?

Jefferson had James Madison refuse to give the commission to Marbury

Issue went before the Supreme Court 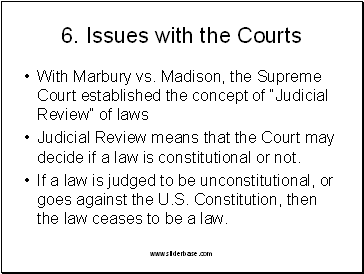 6. Issues with the Courts

With Marbury vs. Madison, the Supreme Court established the concept of “Judicial Review” of laws

Judicial Review means that the Court may decide if a law is constitutional or not.

If a law is judged to be unconstitutional, or goes against the U.S. Constitution, then the law ceases to be a law. 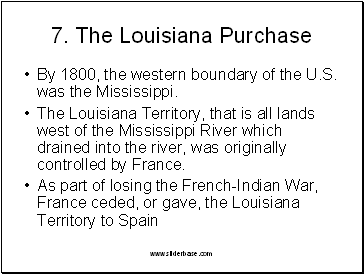 By 1800, the western boundary of the U.S. was the Mississippi.

The Louisiana Territory, that is all lands west of the Mississippi River which drained into the river, was originally controlled by France.

As part of losing the French-Indian War, France ceded, or gave, the Louisiana Territory to Spain 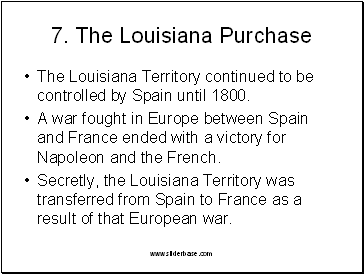