Lewis was to explore the territory, map it, find a water route to the Pacific, make friends with the Native Americans, and drive out all French and/or British traders if possible. 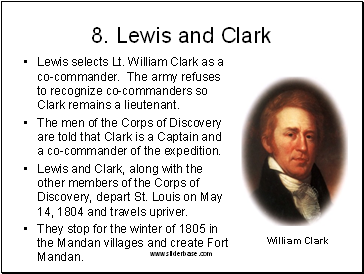 Lewis selects Lt. William Clark as a co-commander. The army refuses to recognize co-commanders so Clark remains a lieutenant.

The men of the Corps of Discovery are told that Clark is a Captain and a co-commander of the expedition.

Lewis and Clark, along with the other members of the Corps of Discovery, depart St. Louis on May 14, 1804 and travels upriver.

They stop for the winter of 1805 in the Mandan villages and create Fort Mandan. 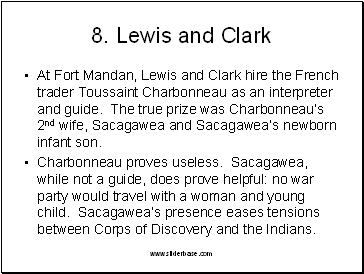 At Fort Mandan, Lewis and Clark hire the French trader Toussaint Charbonneau as an interpreter and guide. The true prize was Charbonneau’s 2nd wife, Sacagawea and Sacagawea’s newborn infant son.

Charbonneau proves useless. Sacagawea, while not a guide, does prove helpful: no war party would travel with a woman and young child. Sacagawea’s presence eases tensions between Corps of Discovery and the Indians. 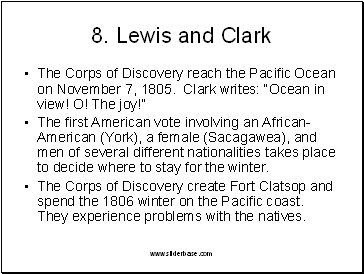 The Corps of Discovery reach the Pacific Ocean on November 7, 1805. Clark writes: “Ocean in view! O! The joy!”

The first American vote involving an African-American (York), a female (Sacagawea), and men of several different nationalities takes place to decide where to stay for the winter.

The Corps of Discovery create Fort Clatsop and spend the 1806 winter on the Pacific coast. They experience problems with the natives. 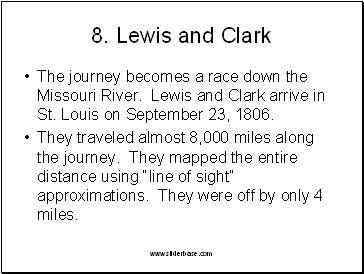 The journey becomes a race down the Missouri River. Lewis and Clark arrive in St. Louis on September 23, 1806.

They traveled almost 8,000 miles along the journey. They mapped the entire distance using “line of sight” approximations. They were off by only 4 miles. 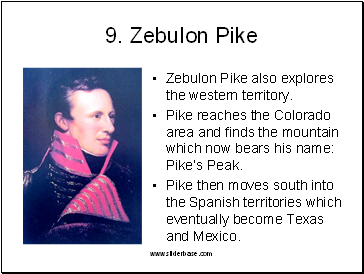 Pike reaches the Colorado area and finds the mountain which now bears his name: Pike’s Peak.

Pike then moves south into the Spanish territories which eventually become Texas and Mexico. 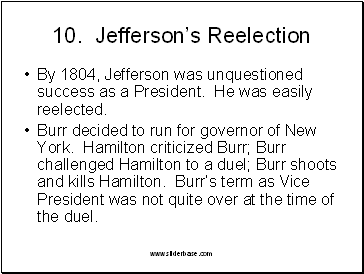 By 1804, Jefferson was unquestioned success as a President. He was easily reelected.