Colonists reactions were on occasion riotous. This was seen in a popular tactic used by the colonists in which they would threaten or attack the court appointed stamp commissioners (collectors).

Many were also threatened to be tarred and feathered, but none of the collectors were ever harmed in this way.

By November 1, 1765, the day the Stamp Act was to go into effect, there were no stamp commissioners left in the colonies. 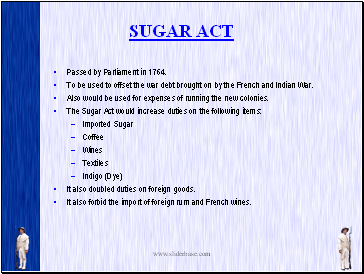 To be used to offset the war debt brought on by the French and Indian War.

Also would be used for expenses of running the new colonies.

The Sugar Act would increase duties on the following items:

It also forbid the import of foreign rum and French wines. 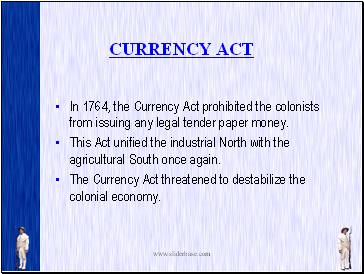 In 1764, the Currency Act prohibited the colonists from issuing any legal tender paper money.

This Act unified the industrial North with the agricultural South once again.

The Currency Act threatened to destabilize the colonial economy. 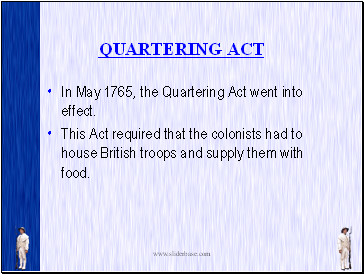 In May 1765, the Quartering Act went into effect.

This Act required that the colonists had to house British troops and supply them with food. 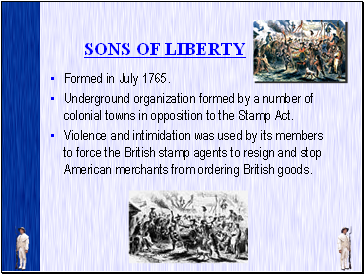 Underground organization formed by a number of colonial towns in opposition to the Stamp Act.

Violence and intimidation was used by its members to force the British stamp agents to resign and stop American merchants from ordering British goods. 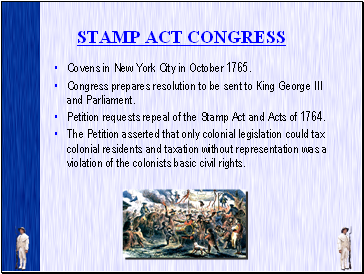 Congress prepares resolution to be sent to King George III and Parliament.

Petition requests repeal of the Stamp Act and Acts of 1764.

The Petition asserted that only colonial legislation could tax colonial residents and taxation without representation was a violation of the colonists basic civil rights. 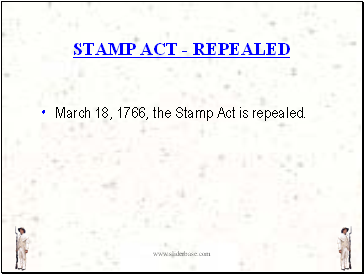 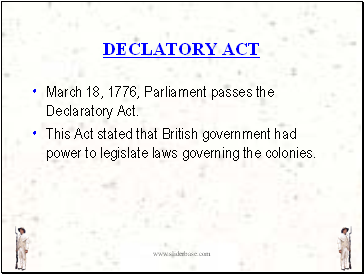