Some experiments could not be explained by the wave model of light.

The photoelectric effect was a major phenomenon not explained by waves.

When light strikes a metal surface, electrons are sometimes ejected from the surface.

The kinetic energy of the ejected electron is independent of the frequency of the light.

Einstein (in 1905) proposed an explanation of the photoelectric effect that used the idea of quantization.

The quantization model assumes that the energy of a light wave is present in particles called photons. 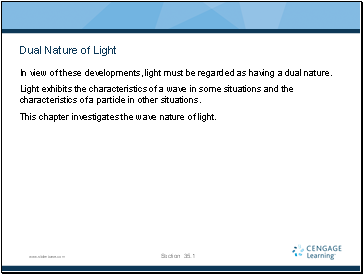 In view of these developments, light must be regarded as having a dual nature.

This chapter investigates the wave nature of light. 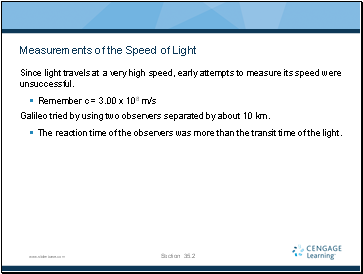 Measurements of the Speed of Light

Since light travels at a very high speed, early attempts to measure its speed were unsuccessful.

Galileo tried by using two observers separated by about 10 km. 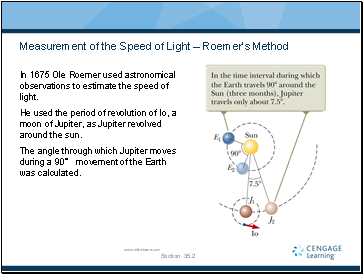 Measurement of the Speed of Light – Roemer’s Method

In 1675 Ole Roemer used astronomical observations to estimate the speed of light.

He used the period of revolution of Io, a moon of Jupiter, as Jupiter revolved around the sun.

The angle through which Jupiter moves during a 90° movement of the Earth was calculated. 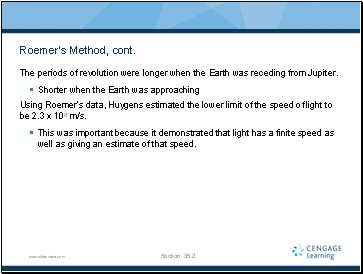 The periods of revolution were longer when the Earth was receding from Jupiter.

Shorter when the Earth was approaching

Using Roemer’s data, Huygens estimated the lower limit of the speed of light to be 2.3 x 108 m/s.

This was important because it demonstrated that light has a finite speed as well as giving an estimate of that speed. 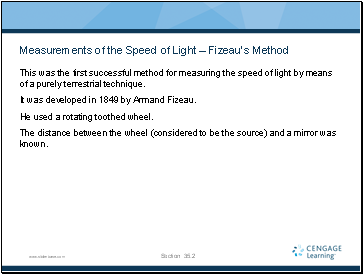 Measurements of the Speed of Light – Fizeau’s Method

This was the first successful method for measuring the speed of light by means of a purely terrestrial technique.

It was developed in 1849 by Armand Fizeau.

He used a rotating toothed wheel.

The distance between the wheel (considered to be the source) and a mirror was known. 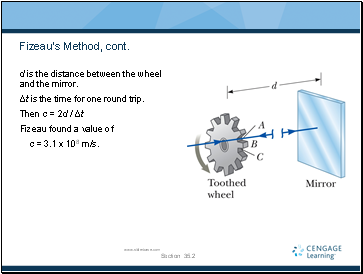