The Effects of Radiation on Living Things
Page
2 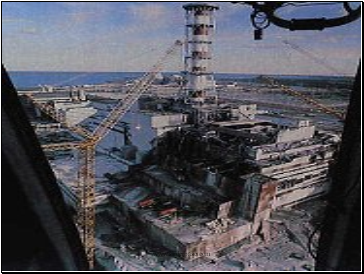 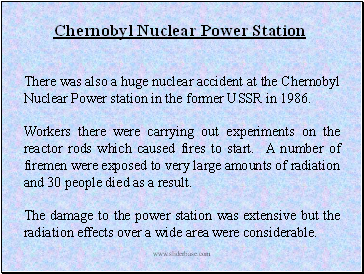 There was also a huge nuclear accident at the Chernobyl Nuclear Power station in the former USSR in 1986.

Workers there were carrying out experiments on the reactor rods which caused fires to start. A number of firemen were exposed to very large amounts of radiation and 30 people died as a result.

The damage to the power station was extensive but the radiation effects over a wide area were considerable. 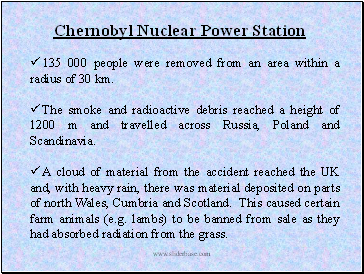 The smoke and radioactive debris reached a height of 1200 m and travelled across Russia, Poland and Scandinavia.

A cloud of material from the accident reached the UK and, with heavy rain, there was material deposited on parts of north Wales, Cumbria and Scotland. This caused certain farm animals (e.g. lambs) to be banned from sale as they had absorbed radiation from the grass. 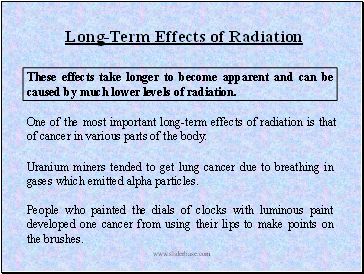 These effects take longer to become apparent and can be caused by much lower levels of radiation.

Uranium miners tended to get lung cancer due to breathing in gases which emitted alpha particles.

People who painted the dials of clocks with luminous paint developed one cancer from using their lips to make points on the brushes.

One of the most important long-term effects of radiation is that of cancer in various parts of the body. 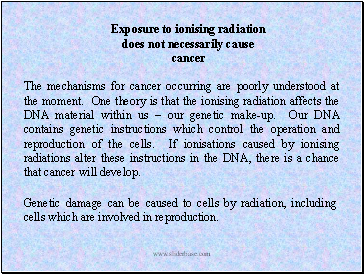 Exposure to ionising radiation does not necessarily cause cancer

The mechanisms for cancer occurring are poorly understood at the moment. One theory is that the ionising radiation affects the DNA material within us – our genetic make-up. Our DNA contains genetic instructions which control the operation and reproduction of the cells. If ionisations caused by ionising radiations alter these instructions in the DNA, there is a chance that cancer will develop.

Genetic damage can be caused to cells by radiation, including cells which are involved in reproduction. 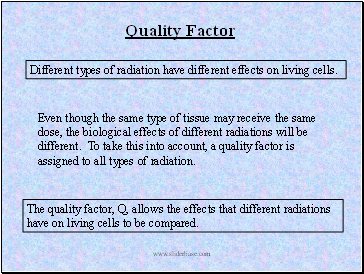 Different types of radiation have different effects on living cells.

Even though the same type of tissue may receive the same dose, the biological effects of different radiations will be different. To take this into account, a quality factor is assigned to all types of radiation.

The quality factor, Q, allows the effects that different radiations have on living cells to be compared.