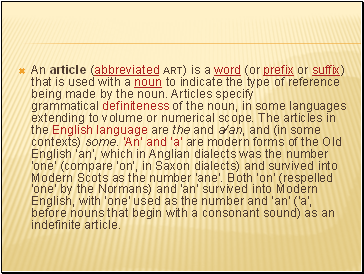 An article (abbreviated art) is a word (or prefix or suffix) that is used with a noun to indicate the type of reference being made by the noun. Articles specify grammatical definiteness of the noun, in some languages extending to volume or numerical scope. The articles in the English language are the and a/an, and (in some contexts) some. 'An' and 'a' are modern forms of the Old English 'an', which in Anglian dialects was the number 'one' (compare 'on', in Saxon dialects) and survived into Modern Scots as the number 'ane'. Both 'on' (respelled 'one' by the Normans) and 'an' survived into Modern English, with 'one' used as the number and 'an' ('a', before nouns that begin with a consonant sound) as an indefinite article. 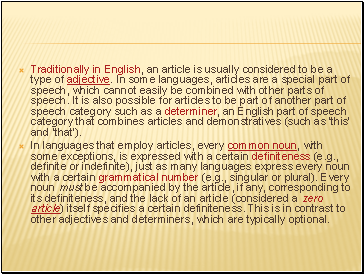 In languages that employ articles, every common noun, with some exceptions, is expressed with a certain definiteness (e.g., definite or indefinite), just as many languages express every noun with a certain grammatical number (e.g., singular or plural). Every noun must be accompanied by the article, if any, corresponding to its definiteness, and the lack of an article (considered a zero article) itself specifies a certain definiteness. This is in contrast to other adjectives and determiners, which are typically optional. 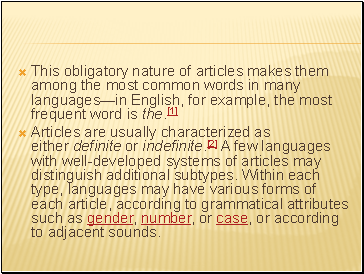 This obligatory nature of articles makes them among the most common words in many languages—in English, for example, the most frequent word is the.[1]

Articles are usually characterized as either definite or indefinite.[2] A few languages with well-developed systems of articles may distinguish additional subtypes. Within each type, languages may have various forms of each article, according to grammatical attributes such as gender, number, or case, or according to adjacent sounds. 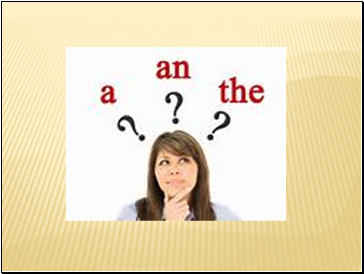 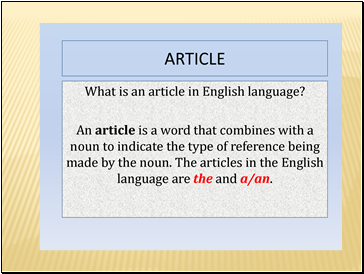 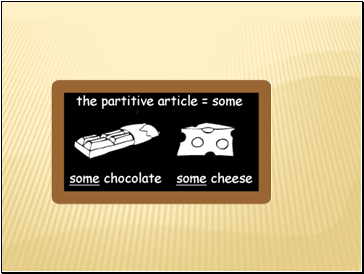 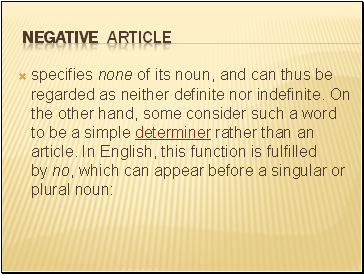 specifies none of its noun, and can thus be regarded as neither definite nor indefinite. On the other hand, some consider such a word to be a simple determiner rather than an article. In English, this function is fulfilled by no, which can appear before a singular or plural noun: