The French Revolution and Napoleon- Patterns of Civilization
Page
2

2a. What groups made up each of the three estates in France?

First Estate: higher clergy, who were also nobles; parish priests, who were commoners

2b. What privileges did the First and Second Estates enjoy?

Higher clergy: lived in luxury – some in Versailles. Owned vast amount of land and paid no taxes.

Nobility: many had great wealth; exempt from most taxes; collected feudal dues

3. List three factors that contributed to the French economic crisis of the 1770’s and 1780’s. 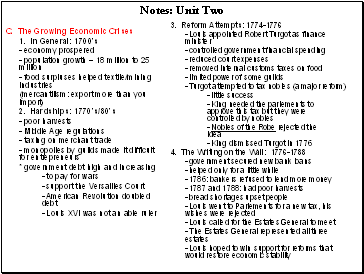 (mercantilism: export more than you import)

- monopolies by guilds made it difficult for entrepreneurs

- to pay for wars

- Louis XVI was not an able ruler

- limited power of some guilds

- Nobles of the Robe rejected the idea

- helped only for a little while

- Louis went to Parlements for a new tax, his wishes were rejected

- Louis called for the Estates General to meet 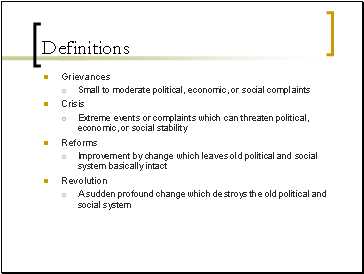 Extreme events or complaints which can threaten political, economic, or social stability