Facts about Our Solar System
Page
1 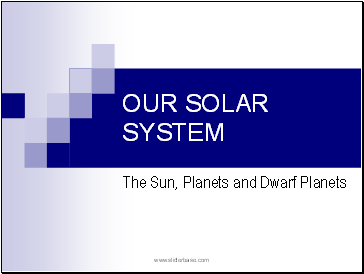 The Sun, Planets and Dwarf Planets 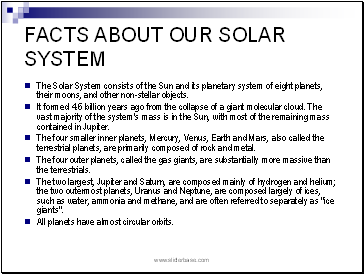 Facts about our solar system

The Solar System consists of the Sun and its planetary system of eight planets, their moons, and other non-stellar objects.

It formed 4.6 billion years ago from the collapse of a giant molecular cloud. The vast majority of the system's mass is in the Sun, with most of the remaining mass contained in Jupiter.

The four outer planets, called the gas giants, are substantially more massive than the terrestrials.

The two largest, Jupiter and Saturn, are composed mainly of hydrogen and helium; the two outermost planets, Uranus and Neptune, are composed largely of ices, such as water, ammonia and methane, and are often referred to separately as "ice giants".

All planets have almost circular orbits. 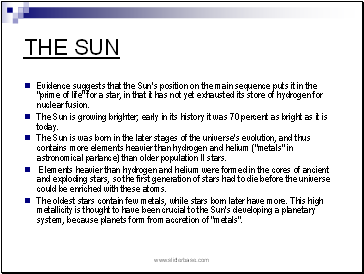 Evidence suggests that the Sun's position on the main sequence puts it in the "prime of life" for a star, in that it has not yet exhausted its store of hydrogen for nuclear fusion.

The Sun is growing brighter; early in its history it was 70 percent as bright as it is today.

The Sun is was born in the later stages of the universe's evolution, and thus contains more elements heavier than hydrogen and helium ("metals" in astronomical parlance) than older population II stars.

Elements heavier than hydrogen and helium were formed in the cores of ancient and exploding stars, so the first generation of stars had to die before the universe could be enriched with these atoms.

The oldest stars contain few metals, while stars born later have more. This high metallicity is thought to have been crucial to the Sun's developing a planetary system, because planets form from accretion of "metals". 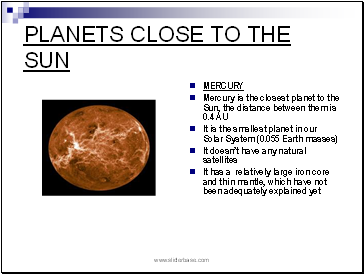 Planets close to the sun

Mercury is the closest planet to the Sun, the distance between them is 0.4 AU

It is the smallest planet in our Solar System (0.055 Earth masses)

It doesn’t have any natural satellites

It has a relatively large iron core and thin mantle, which have not been adequately explained yet 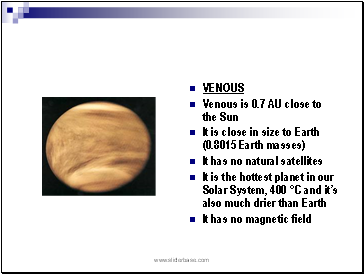 It has no natural satellites

It is the hottest planet in our Solar System, 400 °C and it’s also much drier than Earth