The Origin of the Solar System
Page
2

Long Period Comets (period > 200 years) seems to come mostly from a spherical region at about 50,000 AU from the Sun. 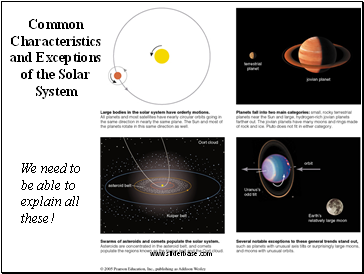 Common Characteristics and Exceptions of the Solar System

We need to be able to explain all these! 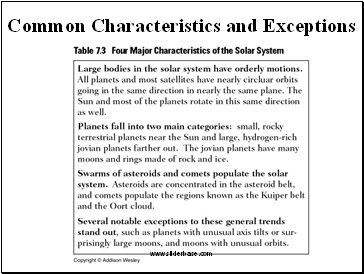 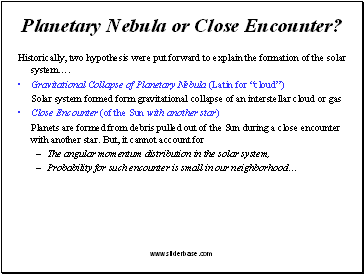 Historically, two hypothesis were put forward to explain the formation of the solar system….

Close Encounter (of the Sun with another star)

Planets are formed from debris pulled out of the Sun during a close encounter with another star. But, it cannot account for

The angular momentum distribution in the solar system,

Probability for such encounter is small in our neighborhood… 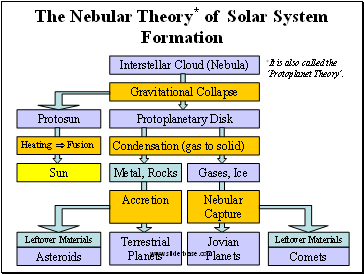 *It is also called the ‘Protoplanet Theory’. 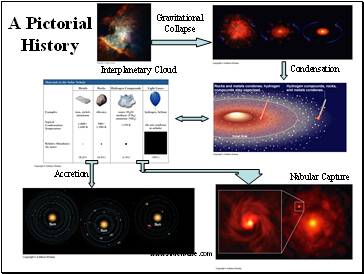 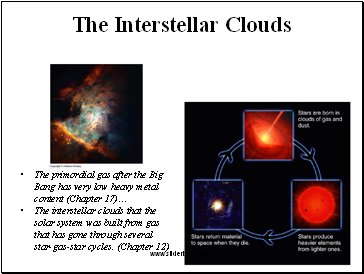 The interstellar clouds that the solar system was built from gas that has gone through several star-gas-star cycles. (Chapter 12) 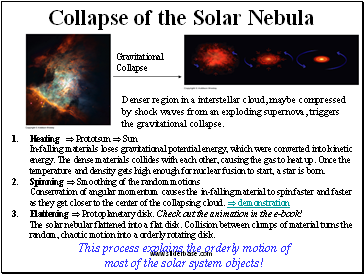 Collapse of the Solar Nebula

In-falling materials loses gravitational potential energy, which were converted into kinetic energy. The dense materials collides with each other, causing the gas to heat up. Once the temperature and density gets high enough for nuclear fusion to start, a star is born.

Conservation of angular momentum causes the in-falling material to spin faster and faster as they get closer to the center of the collapsing cloud.  demonstration

Flattening  Protoplanetary disk. Check out the animation in the e-book!

The solar nebular flattened into a flat disk. Collision between clumps of material turns the random, chaotic motion into a orderly rotating disk.

This process explains the orderly motion of