Morning Prayers – After awakening, the individual would pray, thanking the Creator for blessings and new opportunities. A confession of responsibility was made to other people. Sacrifices were given.

Sacred Path – Day began with man walking reverently along a sacred path, among all living things on earth and under the supernatural powers dwelling in heaven. 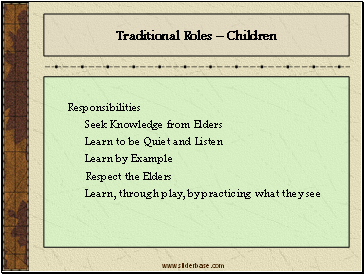 Learn to be Quiet and Listen

Learn, through play, by practicing what they see 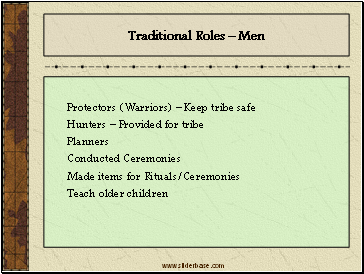 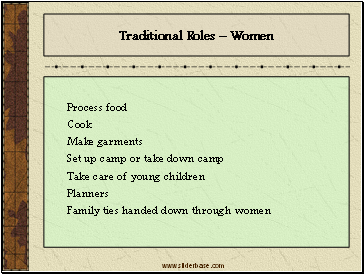 Set up camp or take down camp

Family ties handed down through women 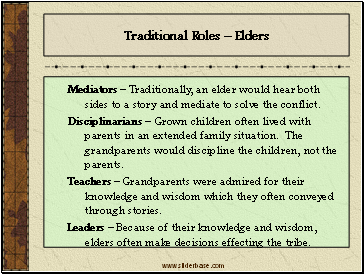 Mediators – Traditionally, an elder would hear both sides to a story and mediate to solve the conflict.

Disciplinarians – Grown children often lived with parents in an extended family situation. The grandparents would discipline the children, not the parents.

Teachers – Grandparents were admired for their knowledge and wisdom which they often conveyed through stories.

Leaders – Because of their knowledge and wisdom, elders often make decisions effecting the tribe. 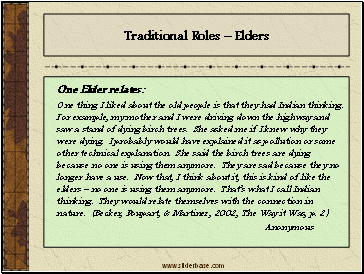 One thing I liked about the old people is that they had Indian thinking. For example, my mother and I were driving down the highway and saw a stand of dying birch trees. She asked me if I knew why they were dying. I probably would have explained it as pollution or some other technical explanation. She said the birch trees are dying because no one is using them anymore. They are sad because they no longer have a use. Now that, I think about it, this is kind of like the elders – no one is using them anymore. That’s what I call Indian thinking. They would relate themselves with the connection in nature. (Becker, Poupart, & Martinez, 2002, The Way it Was, p. 2) 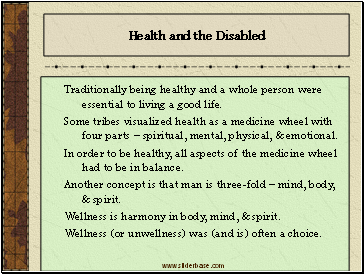 Health and the Disabled