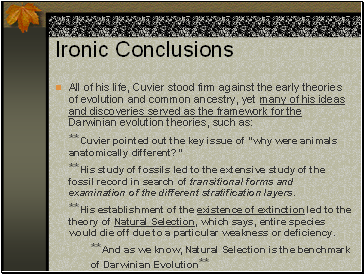 All of his life, Cuvier stood firm against the early theories of evolution and common ancestry, yet many of his ideas and discoveries served as the framework for the Darwinian evolution theories, such as:

**Cuvier pointed out the key issue of “why were animals anatomically different?”

**His study of fossils led to the extensive study of the fossil record in search of transitional forms and examination of the different stratification layers.

**His establishment of the existence of extinction led to the theory of Natural Selection, which says, entire species would die off due to a particular weakness or deficiency.

**And as we know, Natural Selection is the benchmark of Darwinian Evolution** 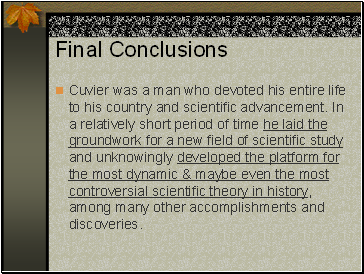 Cuvier was a man who devoted his entire life to his country and scientific advancement. In a relatively short period of time he laid the groundwork for a new field of scientific study and unknowingly developed the platform for the most dynamic & maybe even the most controversial scientific theory in history, among many other accomplishments and discoveries.