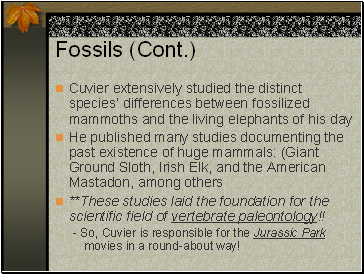 He published many studies documenting the past existence of huge mammals: (Giant Ground Sloth, Irish Elk, and the American Mastadon, among others

**These studies laid the foundation for the scientific field of vertebrate paleontology!!

- So, Cuvier is responsible for the Jurassic Park movies in a round-about way! 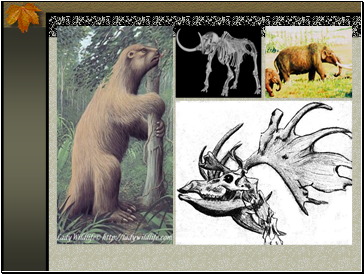 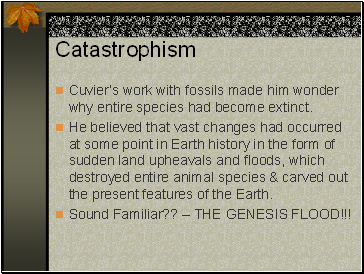 Cuvier’s work with fossils made him wonder why entire species had become extinct.

He believed that vast changes had occurred at some point in Earth history in the form of sudden land upheavals and floods, which destroyed entire animal species & carved out the present features of the Earth. 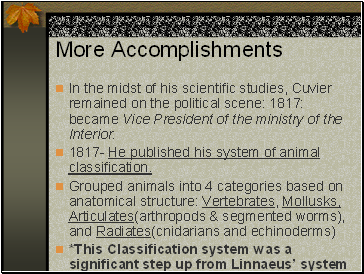 In the midst of his scientific studies, Cuvier remained on the political scene: 1817: became Vice President of the ministry of the Interior.

1817- He published his system of animal classification.

*This Classification system was a significant step up from Linnaeus’ system 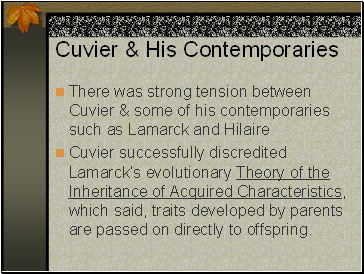 Cuvier successfully discredited Lamarck’s evolutionary Theory of the Inheritance of Acquired Characteristics, which said, traits developed by parents are passed on directly to offspring. 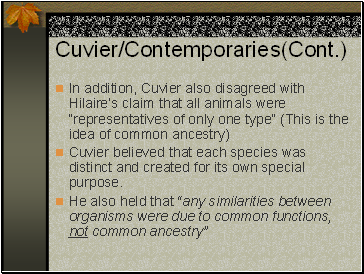 In addition, Cuvier also disagreed with Hilaire’s claim that all animals were “representatives of only one type” (This is the idea of common ancestry)

Cuvier believed that each species was distinct and created for its own special purpose.

He also held that “any similarities between organisms were due to common functions, not common ancestry” 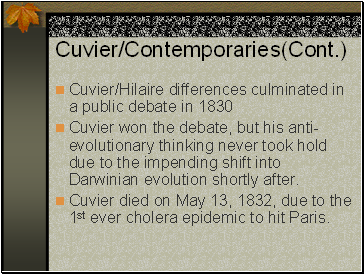 Cuvier/Hilaire differences culminated in a public debate in 1830

Cuvier won the debate, but his anti-evolutionary thinking never took hold due to the impending shift into Darwinian evolution shortly after.