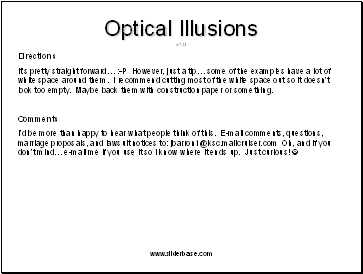 It’s pretty straight forward… :-P However, just a tip… some of the examples have a lot of white space around them. I recommend cutting most of the white space out so it doesn’t look too empty. Maybe back them with construction paper or something.

I’d be more than happy to hear what people think of this. E-mail comments, questions, marriage proposals, and lawsuit notices to: jbarron1@ksc.mailcruiser.com Oh, and if you don’t mind… e-mail me if you use it so I know where it ends up. Just curious!  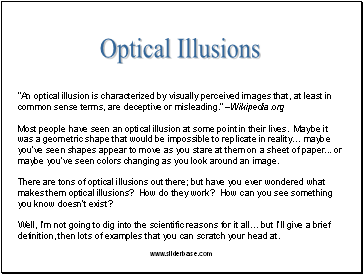 “An optical illusion is characterized by visually perceived images that, at least in common sense terms, are deceptive or misleading.” –Wikipedia.org

Most people have seen an optical illusion at some point in their lives. Maybe it was a geometric shape that would be impossible to replicate in reality… maybe you’ve seen shapes appear to move as you stare at them on a sheet of paper . or maybe you’ve seen colors changing as you look around an image.

Well, I’m not going to dig into the scientific reasons for it all… but I’ll give a brief definition, then lots of examples that you can scratch your head at. 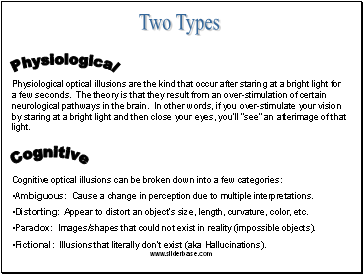 Cognitive optical illusions can be broken down into a few categories:

Ambiguous: Cause a change in perception due to multiple interpretations.

Paradox: Images/shapes that could not exist in reality (impossible objects). 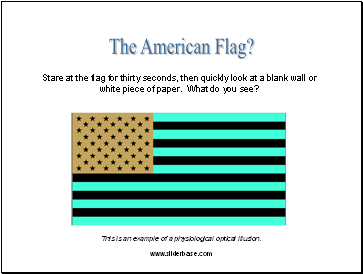 Stare at the flag for thirty seconds, then quickly look at a blank wall or white piece of paper. What do you see?

This is an example of a physiological optical illusion. 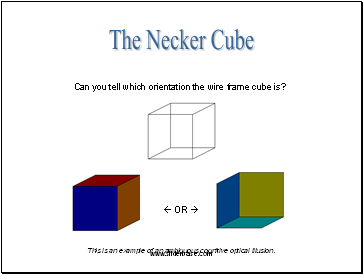 Can you tell which orientation the wire frame cube is?